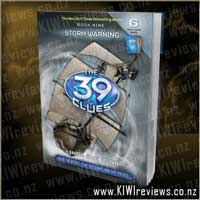 The shadow of a man in black has followed fourteen-year old Amy Cahill, and her younger brother Dan, on their worldwide search for 39 clues that lead to a great power.

Amy and Dan know the man in black has tried to kill them. They know he is a Madrigal, a member of the most secretive and terrifying group hunting for the clues. And they know something else, a secret they would rather forget - their parents were Madrigals too.

Amy and Dan have run hard and fast, but they can't escape the man following them, and now, in the wake of a terrible tragedy, he's ready to step out of the darkness for their final confrontation.

As my almost 10 year old son would say OMG, this series is getting better and better with every book, and with this being the second to last one in the series they are really starting to ramp things up.

As one of the other esteemed reviewers has written, how do you come up with a new and inventive way to extol the virtues of this magnificent book series? Well as we are now at book number nine I must tell you it's getting really quite difficult.

As with the previous book as we are getting closer to the end of the series more and more secrets are being revealed, the big one of the last book being that Dan and Amy belong to the Madrigal branch of the Cahill's.

This time we find the intrepid duo (and their Au pair Nellie) in Jamaica, a country of sun, sand, surf and once again danger, this time from a man in black.

So now I, like many others both here at Kr and around the world, are eagerly awaiting the 10th and final book in the 39 Clues saga.

It is very hard trying not to repeat oneself when writing another review for Amy and Dan for the penultimate outing second to last book in the series.

How does one say this book is fantastic without using all the same superlatives one has previously used? Or describe how wonderfully the combined authors have written these books as seamlessly as possible? Or how fast-paced this book was (as indeed all the others have been) without using the same tired (but totally accurate) cliches?

The truth is, I can't. It is truly impossible. But I can say with conviction that I have enjoyed this book as much as every other book in the series and not one book has out-shone another - such is the high calibre.

In this book, Amy and Dan Cahill find themselves in Jamaica, with Nellie, their nanny where they set out to discover more secrets about their family and more clues as to the ultimate prize. Yet towards the end of the book, the secrets regarding Nellie are revealed and who she has been working for. This was an nice twist in the tale and something I was not expecting. We know now the location of the final book - the last clue is in....

No, I won't spoil it. But safe to say, if you have followed the series so far you will not be disappointed. If you have jumped in now, for whatever reason, I can imagine the first eight books will be acquired and read in quick succession.

I have to say that I will miss following the adventures of Amy, Dan and Nellie over the last nine books. I am certain whoever the lucky author was who was picked to write the final installment will write something that is not to be missed - and this is something I plan not to do.

By far the most thrilling instalment thus far, this is the penultimate title in the 10-book series covering the amazing adventures of Dan and Amy Cahill... newly-discovered members of the Madrigal branch of the world's secret-elite family.

Full of revelations, there is everything in here you could want in a story: action, adventure, betrayal, conspiracy, death, enemies, friends... and that's just the first 7 in alphabetical order! How these two kids, neither of which are yet teenagers, manage to stay alive is a mystery... until the very last chapter... and then the shocks *really* start to pile up.

This book answers a lot of questions, while still managing to pose a few more even tougher ones... and the 'big twist ending' is yet to come, in the final book: "Into the Gauntlet" - to be released in October 2010. In the meantime there are still all the online games and the hundreds of cards to collect. If you are missing any cards, or have some to trade, contact us and we may be able to match you up with other players with surplus cards.

The race for the 39 clues is almost over for Amy and Dan Cahill who have travelled across the five continents looking for the 39 clues that lead to their family's greatest treasure. I thought the cover was quite cool as it had hidden messages in the the picture of the pirate ship, so I found the cover similar to that of the previous book, The Emperor's Code. Storm Warning was interesting because it revealed more info about the Cahill family's past and the clue hunt. There were also some things that I learned from it like the fact that there was a woman named Anne Bonny who once dressed up as a pirate and lived the life of one, and that the Skull and Crossbones flag was created by a pirate nicknamed Calico Jack. I think that this book was more active than book 8 because the situations that Amy and Dan wre put through were a lot more deadly. The part I disliked was when a man named Lester drowned whilst trying to protect a lead that the two siblings had come across from a couple of Lucians, but basically the rest of the book was my "favourite part". The book code was easy-peasy because it was a code I had decoded countless times before, and it was fun to do so as well. If this book series is of any interest to you, you might want to get this book now before time runs out. See you on the hunt.

I'm sure I say this every time, but this was definitely the best one yet. With the stakes building and the children facing the reality of death, it has never been a more exciting or terrifying adventure. Yet again, the fascinating facts are built seamlessly into the storyline, giving the story a grounding in true history. My favourite moment by far, however, was the final chapter and the revelation about the Madrigals... I can't wait for the final book and to see how everything is concluded.

What would happen if you could see clearly into the genetic make-up of your friends and family?

America at the end of the 21st century: 17-year-old James doesn't even know what his real name is, though he feels if someone uses it one day, he'll know it's his. Kindness to others is not an option at Goodhouse, a brutally run corrective school for boys with criminal genes.