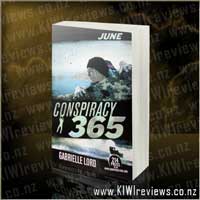 With seconds to spare, Cal escapes from the burning wreck of the Orca. Helicopters search from the sky, while Oriana's thugs chase on foot. There's no time to think about his dead great-uncle - Cal must dodge the cops and crims, and return to his pursuit of the Ormond Jewel.

Convinced Sligo has the Jewel, Cal embarks on a dangerous break-in mission to retrieve it. He hopes it will give him the answers he needs, but what if it reveals another menacing mystery? Stealing from his enemies could prove a fatal mistake...

The clock is ticking. Any second could be his last. Callum Ormond has been warned.

The Wonky Donkey and Other Stories
Rating: 9.9

Now here we are at the halfway point and whilst Cal has begun to get some understanding of what the Ormond Singularity is, he is still a long way from solving the riddle of the Singularity.

This time the pace of the book seems a little more sedate compared to some of the previous books, however that is not necessarily a bad thing as too much excitement (both for Cal

and the reader) is not always a good thing.

I and my son are still enjoying reading this series, as they still manage to keep it fresh even though each book seems to use the same literary formula. Although one thing that is getting a wee bit tedious is the fact that at the end of each book Cal always seems to find himself in some horrible predicament, and of course managing to escape in the first chapter of the next book. If they changed this in at least one book it would certainly be a nice change.

After the last story, this one is a little more tame in most places... no jet planes or tracking bugs... just a hanglider, a jetski, and a lot more running around... oh, and a wild truck ride with Repro behind the wheel and some safecracking too.

Cal is certainly back to his old form of breaking every law he can to try and discover why he's got a bullseye painted on him by everyone he knows, and a lot of people he doesn't as well. His "Ben Galloway" identity is now blown, so he doesn't have any means to travel 'hidden in plain sight' any more, so his reliance on friends and sympathetic strangers is once again at the forefront of his mind.

Thankfully, with crazy allies like Boges and Repro on hand, plus the still-somewhat-untrusted Winter trying to win her way into Cal's favours, Cal manages to pull off yet more insane schemes to keep himself alive another month... and by the end of the book he has successfully reached the half way mark.

Overall, the formulaic plot of "escape -> run -> impending doom" still hasn't worn entirely thin, I hate to say it is starting to become more than a little predictable and thus losing much of it's impact. Having the book end with Cal on the verge of death, or trapped, or... well, something a little fresh would be good to re-enliven the franchise a bit. Still, the 'filling in the sandwich' is still tasty enough to keep the younger ones reading avidly for a few hours, and the massive riddle that is the Ormond Singularity is starting to unravel and reveal itself in pieces... it's going to be very interesting to see just what it is all about, and if Cal reaps the rewards for his heroics, or falls victim to an anticlimax.

This explosive series is now half way through the 12 books that make up the extraordinary Conspiracy 365. The storyline was awesome; in fact it was so fast paced that as soon as I had finished reading it I had an overwhelming urge to read it again! The coolest thing about the storyline was the fact that it was so realistic that it was almost as if it could actually happen.
I hated it when Callum got caught in a fishing net because it was so frightening that it sent shivers down my spine, but I really enjoyed the rest of the book. I think that this book was just as action packed as book five because it was just as intense. Another thing I enjoyed about the book was that it gave me more info about the Ormond Singularity, that ends at midnight on the 31st of December, and I'm interested in puzzles and mysteries.
Join 15 year old Callum Ormond as he continues his quest to survive on the run and discover the secret of the Ormond Singularity.

Time is running out for Callum Ormond. Only six months left until the mysterious Ormond Singularity runs out. With help from friends, he manages to discover the route to another critical piece of the puzzle - the Ormond Jewel - but will he be able to lift it from one of the worst criminals in town, or will he get killed trying.

Conspiracy 365 is always on the move, with explosions, near misses and plenty of impending doom, so it makes sense that there is not really any time for Cal to do much other than run or think about the puzzle. Still, the single track nature of the story does place it firmly in the younger end of young adult. The 39 Clues (a similar episodic puzzle series), in comparison, is littered with random historical facts, changes in location and far more importantly, real character development.

If I could change one thing about this series at this point, it would be to allow just a bit more character development and interpersonal relatedness. By himself, Cal is a severely harangued teenager, which is realistic, but starts to get a little boring.

Still, to be fair, the cliff hanger endings keep me wanting to know how he gets out of the latest version of impending doom.

Two years ago, Jack Morgan was in Rio consulting on security for the World Cup. The tournament went without a hitch. Until a man died in one of the executive hospitality suites during the final, and the autopsy showed the cause to be a rare and deadly virus.

The story was kept from the media to avoid causing panic, but Jack feared that the death was no freak occurrence.

Now the eyes of the world are once again turned ... more...