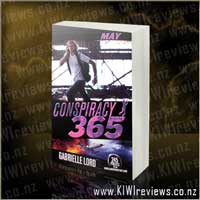 The sound of screaming fills the air. Cal's identity has been stripped from him and he's been locked up in an asylum where danger lurks on both sides of the bars. He has no idea who has put him there, but the doctors are convinced Cal - Ben Galloway - is delusional, and have no intention of setting him free.

Cal can't reach great-uncle Bartholomew or solve the Dangerous Mystery of the Ormonds, when he's wearing a straightjacket. No one believes a word he says; not even the truth can save him now.

The clock is ticking. Any second could be his last. Callum Ormond has been warned.

Can this series get any better? I thought the previous book was good, but boy was I mistaken. With each new book the danger/suspense level keeps getting ramped up to the next level.

I must admit putting Callum into an insane asylum is a brilliantly inspired piece of writing and makes this books danger level that much higher.

) have been getting more and more intrigued and read with anticipation what will happen next to Cal Ormond in his search for the Ormond Singularity.

In this installment i'm grateful that the puzzle of how Oriana's goons were able to follow him everywhere was solved as that was something that had been puzzling my son for a while.

With this book we are now 5 books in and 7 to go and I can't wait to see what comes next.

Fifth in the series, 'May' recounts Cal's attempts to escape from the "Leechwood" sanitorium, his journey to Mount Helicon to see his Great-Uncle Bartholomew, and the discovery of just how Oriana's team of bad guys have been able to track his whereabouts so easily for months.

This instalment also recounts the new tragedies in his life: the loss of his Great-Uncle, the loss of Bart's plane, the news of another attack on his family, and all the hardships he has to go through just to survive.

With support from some unexpected quarters, Callum manages to once again make it through another months on the run... just. And as usual, that last day of the months sees him in dire circumstances needing another miracle to make it through.

Overall, this is another great instalment, but I found it a little drawn out, particularly at the start. Some less-enthusiastic readers may need a little encouragement to get through the first half, but the last couple of chapters make up for it. Roll on 'June'.

The adventure continues with Cal's imprisonment in the mental hospital, a daring escape and a few more clues for the puzzle.

This is a twelve book series which means each book is given a dramatic beginning and ending to hook the reader, keeping them waiting for the next instalment. It is amusing to discover the various ways Cal manages to escape impending doom, though there is no doubt, of course, that he will escape - otherwise how would there be twelve books, right?

Still, lots of fun to be had for the young adult reader - primarily males. I do find myself wishing a little more actually happened in each instalment, as it seems to be an awful lot of running around and dodging bullets and not much in the way of puzzles, but as a pure adventure it definitely holds a fast pace and a cliffhanger ending.

Bring on the June issue.

So far the Conspiracy 365 book series has gone from the first book, January, to May, the latest edition. After reading the previous editions of the series I must say that this one is very different from the others as it took longer for Callum to escape the asylum he was locked up in (as revealed at the end of book 4, April). However, I was thrilled when he managed to escape because I was starting to think that the asylum was just flat-out horrible. I enjoyed it the most when Cal discovered that Oriana de la Force, one of his enemies, had implanted a small transmitter in his shoulder back in January. I enjoyed that part of the story because for two reasons: one, the transmitter was tracking Cal's every move so it was a pretty active situation thus making it more enjoyable for me, and two because it seemed like something straight out of a comic book. The part I enjoyed the least was when Callum's great-uncle died in a terrible fire set by two of Oriana's thugs. I must say that the artwork on the cover and inside the book were awesome as it was so realistic that it seemed to come to life on the page. The piece of artwork that caught my interest the most was the picture of the Jet plane on the bottom half of the cover because I'm interested in high-speed aircraft. This book is a fast-paced adventure that you can't afford to miss, so get it NOW!

Score: 9.3
Product reviews for listing 2222: The Book of Rapture
Written by Nikki Gemmell

Three children wake up in a basement room. They have been drugged and taken from their beds in the middle of the night. Now they are alone.

Where are their parents? Who can they trust? The family has been betrayed to the government and Salt Cottage, their home on a clifftop above the ocean, is no longer safe. Their mother′s scientific work has put them all in danger. To protect them, she must let them go. She must put her faith ... more...