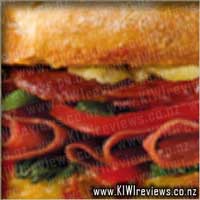 Disclosure StatementFULL DISCLOSURE: A number of units of this product have, at some time, been supplied to KIWIreviews by the company for the purposes of unbiased, independent reviews. No fee was accepted by KIWIreviews or the reviewers themselves - these are genuine, unpaid consumer reviews.
Available:
11am - 4pm daily

It's like no sandwish or burger you've ever tasted!

this was another great option for me. plenty of meat and mountains of flavour even though it too suffered from a less than spectacular amount of fillings. the promotional photos show the meat folded and rolled giving it far more body than the sad almost deflated looking sandwich that revealed itself when i opened the box. i can assume the same amount was there but because it was all laid flat in the REAL thing it just appeared to be far less. it was still very filling and full of flavour which made it worth the effort of trying it. one i would seriously consider buying at lunch time but would much prefer to have the option of buying it for dinner too if only dominos would stop cutting their potential customer base in half.

This one wasn't too bad, and better than most i would argue. The only thing that kinda let this one down was the amount of ingredients, but what little was there was pretty tasty, couldn't even taste the spinach. the capsicum and tomato really worked in this sandwich and the sauce which I found a little hard to taste in the others came through in this one.

The cheese was great in this one really worked well, and did a good binding job n keeping all the fillings from spilling out. It also stayed good and warm for a long time as well, that maybe the bread that helps this i'm not sure. The bread is just awesome having never heard about ciabatta bread before its safe to say i am a fan! slightly crispy on the outside, and doesnt get all soggy in the middle which tomato is prone to do to any sandwich.

The combination of tomato and capsicum should be in every sandwich. it really gives it a moistness which is good as i find pepperoni can dry out a sandwich.
All in all my second choice out of the range.

I was a little worried about this one when it came time for review, as pepperoni can dry out when cooked. It did in this case but the use of the napoli sauce and tomato helped. Capsicum is by far my least fave vegetable but I was surprised to find that although I could clearly see it was there, I could barely taste it. The richness of the sauce and the creaminess of the cheese was a good combination and with the spiciness of the pepperoni, made for a pleasant munch.
My second fave in the range but one I would get again.

I would put this one so close to the Meatball sandwich it would be hard for me to make the choice.
The salami was a little crispy due to the oven baking, though this could be solved by simply making sure it was INSIDE the sandwich rather than poking out the sides. This took away a bit of the flavour factor for me and probably would be the main reason this one didn't rank higher.
With the capsicum giving sweet sharpness, tomato giving that smooth sweetness, the salami giving a spicy edge, oregano adding herbal influence, and the cheese binding it all together, it was impossible for me not to enjoy it.
I thought the fillings looked a little scarce, but then they are all quite flat foods, so don't judge this one by first appearances. Don't get me wrong, I think a bit more of each would have made it top-notch, but it wasn't lacking when it came to filling the tummy.
All in all, this is an excellent one to consider if you want a good, but not bloating, lunchtime treat. The price isn't great when compared to some other options, but I doubt you'd find something as unusual as this at the service station or lunchbar!

This was a very strong 'competitor' in the race for first place, but just didn't quite make it past 2nd... The scarcity of the fillings in this, and their inherent flatness, made the sandwich look way too underfilled to be worth the price, despite there being plenty of flavour. Taking a leaf from a competitor's book, folding or rolling the bigger meats will add volume without adding content, making it feel more of a viable hunger-killer, especially as it's a lunch-menu item.

The napoli sauce was delightful, full of rich tomato and herb flavours, and the mozzarella cheese did it's usual, gooey, wonderful job as edible glue, binding the fillings together. The ciabatta was a great move, due to it's firm crust preventing lap-scorching filling-dropping droops. The fresh tomato was delicious and added a nice, cooler taste to offset the sharpness of the pepperoni. Baby spinach was a nice idea, but became badly wilted and rather bitter. I would have skipped that, myself.

overall, firmly locked in second place, this is still a pretty delightful contender in the OSB range. Plenty of flavour, and a fair set of fillings, even if it doesn't appear that way at first.

Enjoy our Roasted Capsicum Antipasto layered into lasagne, or as a fresh flavour hit when building a burger or taco.