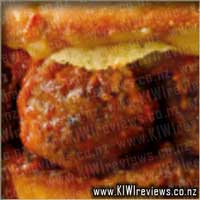 Disclosure StatementFULL DISCLOSURE: A number of units of this product have, at some time, been supplied to KIWIreviews by the company for the purposes of unbiased, independent reviews. No fee was accepted by KIWIreviews or the reviewers themselves - these are genuine, unpaid consumer reviews.
Available:
11am - 4pm daily

It's like no sandwish or burger you've ever tasted!

I really enjoyed this sandwich. The sauce wasn't too thin and coated the meatballs nicely. The cheese that was used blended well with the sauce and added an extra dimension to the flavour. It also didn't go like rock, which can happen. The use of ciabatta was a nice twist on a classic sub-type sandwich, as it kept firm when I think another type of bread may not have.
I felt that the meatballs may have been a little overcooked considering their size. When I bit into it, the texture was, in my opinion, slightly closer to sausage than meatball. This did not detract from the overall taste, just an observation.
In all, This was a great choice of sandwich and one I will gladly pay full price for. Good job, Domino's Pizza for giving us an alternative to the classic pizza.

by far and away the best of the entire range as far as i was concerned. the meatballs were full of meaty flavour without being too messed up by heaps of spices. a little chewy perhaps which is something i dont really like but can put up with if the rest of the fillings were appealing which these certainly were. no salads or veges in it though which was a little disappointing. perhaps next time i will add something extra into mine like shoestring fries just to add a bit of extra bulk and make it a totally satisfying lunchtime meal. after all they say you should have your biggest meal at lunch instead of dinner. this is certainly one i plan to have again. many times over. especially when it appears they will occasionally become cheaper with coupons through the emailed vip club. a great feed well worth top score as far as i am concerned.

Being the meatball fan that I am, I was a little disappointed with this sandwich. After eating a whole one of these, I found it quite bland, couldn't really taste the sauce at all. I did like the cheese however, even when it had cooled down the cheese didn't turn to that hard plastic yellow stuff that is usually on takeaway food, and the sandwich held its heat for a good while before it cooled which was good. The bread was also cooked perfectly - slight crispy texture on the outside and softer in the middle - provided good texture.

It is a messy one though, but hey what good food isn't. Most of the meatballs fell back into the packet so hold it tightly and have plenty of napkins around while munching on one of these. I would also suggest you halve it and mix and match with another, or have a coke or something with it to wash it down.

Its a pity these are only lunches as it would probably be a good feed at the end of the night when you're just looking for something to soak up the fluids you have digested during the night.

This was a pretty good sandwich, though it was more of a 'slippery mess, in a crispy bun' in terms of it's edibility. When it was fresh and hot, the cheese did nothing to prevent the fillings from sliding out and onto my lap. Thankfully I had the box folded flat open and in the flightpath of falling debris.
As the sandwich cooled and the cheese started to solidify again, the fillings stopped escaping and became a lot easier to eat. This was a better way to eat it as far as I was concerned as the flavour was able to come through the heat, and I didn't burn my tongue on molten-lava sauce.
As a lunchtime food, this is a great addition to the Domino's menu. In fact I would think it a great addition to the menu all day. I would happily consume one of these as the main course in a 'junk food' dinner along with some garlic bread, and maybe finished off with one of those delightful Chocolate Lava cakes they make.
All in all, this would have to be one of the best additions to their menu in a long time, and one I hope hangs around for a lot longer. It's a little expensive for what you get, when compared to a pizza on a Tuesday night deal, but if that doesn't bother you, any carnivore will find it a very appealing feed.

Of the five Oven Baked Sandwiches (OSBs) I tried, this was by far my personal favourite. The meatballs gave you that mouth-feeling of good solid food, the ciabatta stayed crisp on the outside but soft inside, the cheese was well melted and held it all together perfectly, and the Napoli sauce was just delightful, with plenty of flavour and herb hints of its own.

I felt quite satisfied after eating a half one of these... not full, but certainly not still hungry, and was able to pace myself for the testing meal, which would have otherwise defeated me at the onset. For those not testing bulk OBSs, a whole one of these is about the same price as an entire pizza, but is a perfect meal-for-one.

Overall, because of the price comparison to the pizzas, I felt this to be a little overpriced... but then you need to reflect that the similarity in price is more because of discounted pizza pricing, than overpricing this. Keeping that firmly in mind, this is pretty good value for money by it's own merits... but if budget is an issue and you have many mouths to feed, keep this on hold for that 'self-indulgent special treat' another night. My only real gripe is that this is a lunch-menu item only, and since I hardly get a chance to buy Domino's during the day, I miss out. I'd love to see it on the dinner menu too, as I think it would be a winner there!

Delicate pieces of premium tuna prepared according to a traditional Tom Yum recipe from Thailand.

The blend of Thai herbs, spicy lemongrass and chilli provides a unique culinary delight that is best served hot over rice or noodles.