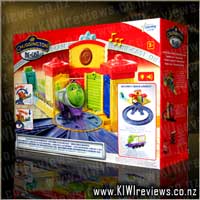 This lights & sounds playset is the trainees' "home" and a great centrepiece for your Chuggington die-cast world.

Rotate the launcher and eject the engines onto the circle of track when adventure calls! Features 4 engine bays and a rotating launcher with turntable.

This is a toy that seems to be a real hit with my little one. Earlier in the year we got some 'Chuggington' DVDs and he took to them like a duckling to water... so I wasn't all that surprised that when he saw this box he let out a squeal of excitement and started repeating "ch-ch-ton!" at an ever increasing volume

Because of the number of small parts, I could understand why the contents were all wired into place so firmly, but judicious application of a pair of sidecutters soon released all the bits, and assembly was a breeze. I was particularly impressed by the simple, yet firm, attachment method for the tracks. After a little experimentation, I found that if I steepled the two tracks in the same manner as one would interlace their fingers when imitating Mr Monty Burns from the Simpsons, the tracks were a lot easier to join without one of the 'fingers' diving underneath where it should be. They clipped together firmly, but without any extreme effort. A child could easily do this after a small bit of initial adult guidance.

The rest of the pieces are very simple to attach - and apparently detach too - as my son spent the next 2 hours happily playing with everything... dismantling it, reassembling it, changing track layouts... you name it he tried it. He was overjoyed when he discovered that when the sliding train launcher clicks into one of the four 'station houses' the front door of that house pops open and the P.A. system plays one of the mini-tunes from the show. He was even more pleased with himself when he figured out that the noises were actually triggered by the door popping fully open, rather than the launcher reaching any particular point. So a further hour of play ensued with him basically playing with the doors and triggering all the sounds.

The train that comes with the kit, Coco, is well constructed and sturdy enough to handle drops from toddler-height easily. A plummet to carpet is no problem, and even onto lino leaves it unscathed, however a temper-tantrum fueled hurl out the back onto concrete did chip a bit of paint off, but otherwise left Coco dent-free... so an excellent, safe product there. All the other parts are mouth-safe as much as any other toy... you have to keep an eye on them, but they are big enough that the wee ones won't get them far enough into their mouths to cause choking. However, basic child safety rules apply: Never let your child play with small bits unattended.

Overall, a pretty good toy. It takes 2 x 'AA' batteries, which are not supplied, so if you plan to get this be sure to swing past the battery stand at your local supermarket and grab a pack. They should last quite a while, as the only power-using part is the musical P.A. system, and in the course of normal play that will only fire up in really short bursts here and there. The launcher is the only weak-point in this toy, in that it is somewhat 'less than effective' shall we say. It *does* launch the train, but the younger players will soon get disappointed by how short a distance the train actually gets moved. A hard enough slam on the button to really get the train moving will very rapidly cause either sore hands or a broken toy - neither are good options. However, this doesn't detract from an otherwise positive toy that any little train fan is sure to get fun from.

Become the street-smart, frontline Autobot warrior! Use your wits and power to battle the Decepticons and protect Earth from their evil. When you've got the power of Bumblebee, nothing can stand in your way!

Suit up just like the Bumblebee character and prepare to save the universe with your amazing voice-mixer helmet! With three different modes and awesome electronic features on this detailed helmet, you'll look like the