ProdID: 255 - The Day After Tomorrow
Directed by Roland Emmerich 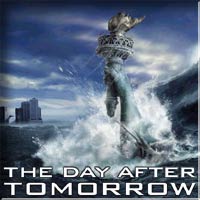 Disclosure StatementFULL DISCLOSURE: A number of units of this product have, at some time, been supplied to KIWIreviews by the company for the purposes of unbiased, independent reviews. No fee was accepted by KIWIreviews or the reviewers themselves - these are genuine, unpaid consumer reviews.
Available:
on DVD - 7 Oct 2004

The Day After Tomorrow product reviews

A look at what the world would look like if the greenhouse effect and global warming continued and ocean currents changed due to alterations in salinity. This would result in worldwide catastrophe and disaster, including multiple hurricanes, tornadoes, tidal waves, floods and the beginning of the next Ice Age.

At the center of the story is a paleoclimatologist (a scientist who studies the ways weather patterns changed in the past), Professor Adrian Hall, who tries to save the world from the effects of global warming while trying to convince a reluctant government that this is indeed the beginnings of a new Ice Age.

In addition to all of the other challenges Dr. Hall faces, he's also going against the flow as humanity races south to warmer climes, and he's nearly the only one going north... to save his son, trapped in New York, in the middle of the worst storm in history, where death is waiting just outside the glow of a fireplace.

My mum simply adores end of the world natural disaster movies and she took me with her to see this film, I myself wasn't as into natural disaster movies and so wasn't really looking forward to it but by the time I came out of the cinema I had had me a good time. The basic premise of this movie is that there are a tonne of natural disasters occurring, including a new ice age and one of the men who predicted it was happening has to track across America to reach his son and hopefully save him. Not a particularly unique plot line but it is made up for with special effects.

Huge amounts of this movie uses special effects, from huge storms and tornadoes to the huge ice age and the sudden freezes that occur, with one spectacular moment happening when the three trekking across the country discover that they are walking over the top of what was once a mall and have a life and death moment. The acting in this is well done, but no one really stands apart and most if not all of them could have been swapped for another actor.

The special effects in this film are amazing and worth the watch alone.

This movie was one of the first to truly take on the concept of climate change, and use it as a plot for a movie. That is pretty much the plot.

An event occurs, that no-one is prepared for, and a father has to venture across the city, through extreme unknown weather patterns to save his son. As a viewer that agrees with 98% of worldwide scientists who say climate change is real, and a severe threat, I welcomed this film with open arms.

The weather filled the role of the villain, but in reality the Earth is the victim, and using the weather as a form of self defence. I very much enjoyed this films commentary on the lack of action regarding significant changes in our environment.

Emphasis is placed on how nobody was able to prevent this from occurring due to the previous inaction, and this is already common knowledge, with the many people in the real world still suffering in third world conditions after a natural disaster that occurred years ago.

If a global event was to occur, we would have no defence, and this film shows that wit the use of extreme cold, which creates a beautiful blank canvas at the end of the film. Potentially over-the-top, but very much enjoyable and hopefully an educational eye-opener.

Wow!!! That was all I could think for quite a while after seeing this movie.

I had been mildly curious when I first saw the ads for it on telly, and had thought "what the heck," nothing else on at the time that I wanted to go and see, so went to see this one. By the time I walked out of the movie theatre, I could have easily walked straight back to the ticket office and bought a ticket for the next showing if I'd had the money.

What left me so stunned though, was more the believeability of it.. I can see this happening in reality, if things keep going the way they are, and watching it on the big screen... well let's just say I hope things don't end up going that way. The awesome special effects made it seem very real and I was hooked throughly within the first 10 minutes.

Well, I had planned to write a simply scintillating review of this movie, letting everyone know how much I enjoyed it. I even saw it a second time inside a week. Which, although not completely unheard of, is a fairly rare occurance. Writing notes on my impressions of the movie, what I thought, felt, saw, heard... I got myself so completely bamboozled, I nearly didn't bother writing anything at all.

But, I am getting off the track, onto my review.

Simply put, without faffing about, it was BRILLIANT! A good (and VERY believable) premise, great performances from the lead actors and CGI and man-made special effects blended seemlessly.

Overall, I LOVED this movie, and have already told people of my plan to add it to my collection when it comes out on DVD.

Expecting some form of over-dramatised lecture in eco-awareness, thinly disguised as a movie, I was stunned to find myself well and truely hooked within the first half an hour.

The special effects were stunning to say the least. I could easily have believed much of it was actual footage. The extremely high level of realism clearly displayed a number of key points;
- We ARE stuffing up our environment, and thus our very lifeline.
- We are in no way prepared for a true Major Natural Disaster.
- We are a pathetic, puny species, living on a thin shell under a blanket of gases. We have no real protection from nature.
- The producers REALLY want to drive these points home.

I was so hooked, I actually plan to go see it again, and am quite willing to pay full price if that's what it takes. AND, when possible, I plan to add it to my collection.

Overall, it's been nearly 7 hours and I am still stunned by it. If you only ever see one movie this year, this is the movie to see.

Addendum
Saw it again the other day, still stunningly impressive. More so this time, because I was able to spot the leadup cues a lot easier, knowing where they should be, and sure enough they were. Brilliant, simply brilliant..

Second Addendum
Now have this on DVD, (Special Double-Disc Edition) and if it is at all possible I think it's actually better than the cinema! Now I can have a closer look at the special effects, replay bits that had me a little confused first (and 2nd) time around, and the extra disc with the bonus footage, deleted scenes, commentaries, etc just adds so much more to the experience. With a good home theatre system, this is DEFINATELY the premiere movie for 2004's DVD release. Even 4th time around, this movie still blows me away!