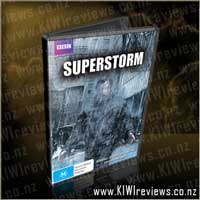 In this exciting, reality-based three part thriller, a team of scientists attempt to do the seemingly impossible - control the weather. Brought together to develop ideas on diverting the course of hurricanes and preventing disasters like Hurricane Katrina ever happening again, this theoretical research project turns into something else entirely when the team are asked to put their ideas into practice.

However, a critical error has been made and the hurricane will be deflected away but will continue moving up the coast - to New York, where it will hit with the impact of a Category 5 Hurricane - a Superstorm. It seems that the team have helped to give birth to something truly terrible - the ability to manipulate the weather to the point of devastation. Can they halt the hurricane before the entire city of New York is destroyed?

Like Supervolcano and The Day After Tomorrow before it, this movie-mentary is something to make even the most blase people sit up and think... the news these days is full of wild and wacky weather, natural disaster events, and terrorism... what if it's all linked? What if some morally-challeneged government black-operation is indeed building devices and systems that can affect global phenomena on a scale significant enough to affect people in the hundreds of thousands? Could we survive a 'miscalculation'?

Split into a a 3-part miniseries, Superstorm follows the efforts and moral dilemmas of a diverse team of experts who range from a computing genius with attitude, a mathematician with an ego bigger than the continental US, a small team of stormchasers, and some governmental 'interface officers' who are put in the position of being able to test various theories and technologies about weather manipulation. When something goes horribly wrong with their calculations, they try to pull the plug, but certain powerful people don't want that to happen.

This is when the weather gets hijacked. Mass flooding, wind damage, tsunami waves rushing down the streets of New York (VERY 'Day after Tommorow'esque) - it all adds up to a day you seriously don't want your washing out in.

Overall, this movie is quite an eye-opener for any intelligent person aware of how badly some people want power, even at the expence of other people's lives. For those who just enjoy a bit of a thriller, it's a nail-biting watch in many places, though a little 'flat' in others. Some good special effects - especially the volumetic laser display, which I SO want one of please - and some interesting plot twists, it's some good Sunday-afternoon blob-out fodder.

After hugely successful tours of Australia, Royal New Zealand Ballet is delighted to be performing this enchanting production, originally created by English National Ballet, throughout the country between March and May.

Angelina loves to dance and dreams of becoming a famous ballerina. ... more...