Chuggington - Wheels to the Rails review 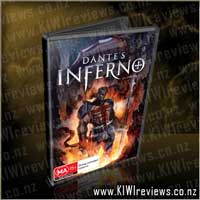 Follow Dante on a harrowing journey through the nine circles of Hell as he travels through limbo, lust, gluttony, greed, anger, heresy, violence, fraud and treachery - all to save his true love, Beatrice, from the clutches of Hell's master, Lucifer.

Featuring a famous cast of voice talents, and told through the eyes of a group of visionary animation directors from around the world, this is the companion to the new game from Electronic Arts.

NOTE: This movie is rated R16 and is not suitable for younger viewers. It contains scenes of graphic violence, horror and graphic nudity.

I have to admit that the games these days are becoming just plain scary... they must be, if this is what they are selling to 'accompany and expand on' the game plots. In line with the DVD movie 'companion' Dead Space, EA are putting out some pretty radical, freaky stuff. No wonder it's getting 'R' ratings!

The animation was pretty astounding I admit, though I found the regular change in the appearance of the characters more than a little annoying. To be expected, I suppose, when you consider the whole movie was chopped into sections, each one handed to a different team to bring to life in their own unique manner. Despite being able to rationalise the sudden schisms and shifts in style, it still detracted from the movie for me.

The plot was predicatable, to those who have read the original, but I found this didn't take anything away from the movie in the least... quite the opposite really, because I found myself wondering how they were going to portray key elements. I found this made me pay *more* attention, rather than less. For those who have never read the original story, then this will be even more appealing. So saying, keep in mind that it's being presented in a very Manga'esque style, so don't expect more than you're going to get.

Overall, though not entirely what I was expecting, I wasn't disappointed by what I got. The sound and visual elements are brilliant in their own way, and a particular favourite element for me was the 'adaptation' of Charon - the Ferryman who takes the souls of the damned across the river Styx to the first circle of Hell, Limbo. It was just so... unexpected. These days, that's a seriously *good* thing as far as I am concerned. Well worth a watch, though I would have liked to have seen it priced a little cheaper, considering it's basically an 84-minute long game-enhancing marketing device.

A group of vampires travels to the desert to resurrect Dracula. In his resurrected form, he is called Drake, and he has new gifts, including the ability to exist in daylight.

The vampires launch a campaign against their nemesis, Blade, and his mentor, Whistler. Blade and Whistler's only hope is to team with the Nightstalkers, a group of human vampire hunters lead by Whistler's daughter, Abigail and Hannibal King, a somewhat erratic ex-vampire.

But can Blade stand up to the father of all vampires, the original, Dracula himself?