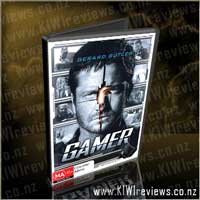 In a foreseeable future, gaming and entertainment have evolved into a terrifying new hybrid.

Humans control other humans in mass-scale, multi-player online games: people play people for keeps. At the heart of the mind-control technology, and the creator of these controversial games, is reclusive billionaire Ken Castle.

His latest brainchild, the first-person shooter game 'Slayers', allows millions to act out their most savage fantasies online in front of a global audience, using real prisoners as avatars with whom they fight to the death.

The superstar of this cult game is Kable, who is controlled by Simon, a young gamer with rock-star status. Week after week, Simon defies the odds by guiding Kable to victory. But Kable, forced to fight against his will, is desperate to escape the game. Can this modern-day gladiator survive long enough to free his imprisoned family, regain his identity and finally rid mankind of Castle's ruthless technology?

This concept had my attention all the way through; a combination of ideas to those portrayed in "The Matrix", "Death Race", and "The Condemned", even "Hunger Games". The idea revolves around the idea of commercial entertainment, controlling the prison system. Creating technology, so that 'Players' can control real criminals, to play out real-life video games. Criminals voluntarily sign up with the promise of freedom if they reach so many wins (or if they survive one game as an exposed NPC) but as with most of these style of events, no one ever wants the criminals to survive, and so the odds get worse as the lead role, played by Gerard Butler, gets more wins and more fame.

There is a fair amount of first person 'shaky camera' footage in this film but it works in this case, as we are looking at an advanced version of a video game. Even the 'player' wants to help the convict escape in the end. As the movie progresses, the action continues beyond escape, carrying on with revenge and retribution. I was delighted with the grittiness of this film, and the stark reality of what is potentially the future of reality television and gaming. This movie has received mixed reviews, but as a part-time gamer, I loved this commingling of the two art forms.

One can only wonder, with fear, if such a future is already underway. Sure, as far as we, the public, are aware, nanotechnology isn't at the stage where it can be used to replace organic cells and form not only a remote control pathway, but an audio/video output stream, a remote IP address (making you PART of the internet, not just logged into it), and in many ways a computing nexus inside your skull. But as we have found out in the past, the 'cutting edge' is often far in advance of what we are made aware of... so who knows?

For myself, I would both welcome and fight against a future such as the one put forth in this film... I would welcome the medical advances such a technology could bestoy, such as repair of brain damage, vastly superior access to education as cheap as the cost of injecting a single nanocell, and communication as natural and integrated as talking to the person next to you...

I would also welcome the technology used to interface with said network from the 'gamers' side... full-immersion total VR suites that require nothing more than you walking into the room and making suitable gestures to activate and interact with the environment... much in the way Microsoft is aiming for with it's new "Natal" system currently under development for the XBox 360.

I would be unhappy at the thought of someone taking remote control of me though, so there are, as always, two edges to the Damocles Sword of advancing technologies. Imagine a hacker taking over your BRAIN?! -shudder-

Anyways, the movie... take the violent warfare aspect of "Death Race", add in the whole "Second Life" and/or "Sims" aspect of virtual environment societies, toss in a little megalomaniacal messiah-complex from the creator of the tech, played by Michael C. Hall, of TV's "Dexter" fame, and you have some serious action, psychotic manipulation, and outright trippy 'alternate' lifestyles... where anyone can live out their idea of a 'fun' life vicariously through you... and though you are fully aware of what's happening, you have little to no control over your own actions... or what is done to you by others. But at least you're getting paid for it, eh. [sarcasm]That makes it ALL better.[/sarcasm]

Gerard Butler plays the main protagonist, and does a pretty good job of the action scenes, though in some of the more detailed shootouts he seems a bit stilted and mechanical... which is explained in the movie as "the Ping" - the lag between the player sending the instruction and the puppet actioning it. Electronic signals take time to travel, after all. IN this title, he is trapped in the brutal game "Slayers" and thanks in main part to his 'player' - the young and arrogant teenager Simon - he is currently top of the ranks. Which basically means he's still alive after 47 combat missions. If he makes it to 50, he is paroled and set free, to resume his real identity and life. However, powerful people have other plans... no-body wins their freedom in this world.

The film basically revolves around Kable's mission to get free and save his wife and daughter from becoming trapped in the technology, with a side-dish of turnabout for Simon as he finds out what it feels like to be the played, instead of the player, when one of the two competing factions in the bigger war use him to get to Kable.

Overall, on the surface, this movie could be seen as a gore-fest with some minor teenage vulgarity and a bit of flashed skin... but tyhe story is a lot deeper than the glittery scenery would have you believe. There is a story of hope - finding ways of getting through each day waiting for the better future to arrive, a story of power - how those who hold the strings can pull them however they wish, and the masses are but puppets to them, and a story of strength - how even when all your allies are gone, you can still win out if you have the will to fight one step beyond your opponent's limits. I quite liked it, but will say it could easily be one of those "not everybody's thing" type of movies.

Score: 9.3
Product reviews for listing 2781: I am Number Four
Directed by D.J. Caruso