The Gabble - and other stories review 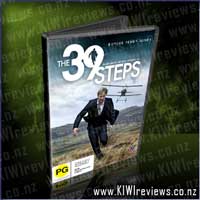 The 39 Steps is a fast-paced adventure movie based on the world famous novel by John Buchan. Starring Rupert Penry-Jones (Spooks, Cassanova) as sophisticated and dashing hero Richard Hannay, a man with an inquisitive mind and a miraculous habit of getting himself out of tricky situations.

Set on the eve of World War One, Hannay has returned to London from South Africa to begin a new life, when he becomes embroiled in an undercover German plot to steal Brittish plans for the outbreak of war. As the clock starts ticking, can Hannay outrun the police and German spies to protect Britain?

This BBC TV version of 'The 39 Steps' is a thoroughly enjoyable suspense adventure with a decent sprinkling of subtle humour and romance. The scenery is absolutely beautiful (set largely in Scotland's Culross in Fife) and the vintage cars are just gorgeous - I love the 'low speed' car chasing as they tootle around corners in idyllic countryside-

It is 1914 and our hero, Richard Hannay, has just come back to London after working in South Africa as a mining engineer. He is thrust by chance into the world of espionage when his neighbour, a man called Scudder, bursts into his apartment and desperately entrusts him with a notebook that must be delivered to Captain Kell, Head of the British Secret Service. In short order Scudder is gunned down by German spies who enter the apartment and then swiftly leave. Hannay is blamed for the 'murder' by a bobby who was nearby and heard the shooting.

Hannay fears the only way he can clear his name is to prove the existence of a secret German post that Scudder had mentioned, located in a small Scottish village, and to get the notebook into the hands of Captain Kell. If he can just keep ahead of the men in hats, be they British police or German spies! The race takes on exasperating and romantic elements as the attractive and forthright suffragette Victoria gets involved-Given the period of the story, the inclusion of an intelligent action role for a major female character was an unexpected and welcome surprise.

I found the movie to be delightful entertainment. Well worth a watch. It really has little in the way of special effects, but I gave it full marks on account of fantastic locations, sets etc and of course those wonderful vintage cars (and the bi-plane).

Score: 8.8
Product reviews for listing 7624: A Cure For Wellness
Directed by Gore Verbinski