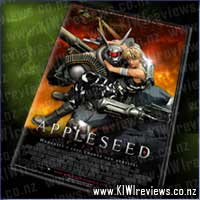 NZ rating: 'M' suitable for audiences 16 years and over

Earth's last city, Olympus, rose from the ashes of a global war on the backs of Bioroids, artificial clones who make up half the city's population. Under the strict guidance of a supercomputer, humanity's last survivors enjoy an idyllic peace, but only on the surface.

Human terrorists within the military seek a return to power and clash with the government's ESWAT forces lead by the legendary soldier, Deunan Knute, and her boyfriend who is 75% machine. Retrieving the Appleseed will end the conflict, and Deunan alone holds its secret.

First things first; if you're looking for a literary masterpiece or an anime masterful like the works of Hayao Miyazaki and Mamoru Oshii, then Appleseed is not for you.

It's plot is clichĂ © with the overused science fiction premise of struggle between two coexisting races and the flaws and sins of humans, and the general execution of the plot is also in no way an outstanding one of the genre. What Appleseed truly is, is a technological achievement , it's animation style is far from Hollywood animation features, instead it uses cel-shading technology which we've already seen in video games, and takes it up to a very high and polished level. The result is a beautiful movie with jaw-dropping animation, such that one cannot doubt that this style will pave the way for the future of anime movies. The range of emotions expressed through the CG is impressive; and motion capture has worked beautifully into the film, making it a seamless viewing experience. As a whole product, it's graphical presentation rivals that of great 2D animation features.

Other aspects are fairly well done; the music is done fairly well, with the opening song giving it a distinct flavour but later that fades away to the average run-of-the-mill songs that aren't particularly effective in rousing the emotions and senses. The artistic direction is great, with wonderful colors and tones chosen to accentuate the mood from the bleak dark ruins to the pastel colors of the Utopia. Scene execution is also stellar, and the structural development of the movie is natural although inter character relationships are somewhat lacking in development.

As a whole, it's an extremely graphically polished product based on an overused premise.

NZ Rating M - Runtime 105 min
(Note: this film is definitely not intended for very young viewers. It includes some fairly graphic violence in some scenes.)

The elders are in debate with Gaia. The question is... Are humans worthy of saving? Or have they finally proven they should be phased out of existence in favour of bioroids - clones engineered with balanced emotions and superior material construction?

This story is set in Olympus, a city designed to be a Utopia. With half the population being emotionally stable, reproductively sterile bioroids, a balance has been introduced to mitigate the violent tendencies of humans. Bioroids are in control of government and humans in control of the military.

Deunan Knute, an elite soldier, has spent her last few years out in the devastated areas fighting pointless battles with cyborgs oblivious to the existence of Olympus. Finally Deunan is located by the government E.S.W.A.T. forces and brought to Olympus. There she is re-united with her boyfriend Briareos - whom she is shocked to discover is now mostly cyborg, having been reconstructed after almost dying in a battle.

In spite of all efforts, mistrust and conflict has been increasing between rogue human extremists and the bioroid government. Deunan holds a vital key in the form of a piece of code known as the Appleseed. But she has never heard of the Appleseed...or has she? Has her memory simply been repressed?

So, the race is on to find the Appleseed. Who will find it first? Government forces, under bioroid Prime Minister Athena? Or rogue military forces under General Uranus? But more is going on than meets the eye, and the outcome is far from certain...

Although some anime purists might frown at the slightly unconventional introduction of 3D in a traditionally 2D animation form, I thoroughly enjoyed the movie. There is a solid story with a good twist.

HIDDEN FIGURES is the incredible untold story of Katherine G. Johnson (Taraji P. Henson), Dorothy Vaughan (Octavia Spencer) and Mary Jackson (Janelle MonĂˇe)-brilliant African-American women working at NASA, who served as the brains behind one of the greatest operations in history: the launch of astronaut John Glenn into orbit, a stunning achievement that restored the nation's confidence, turned around the Space Race, and galvanized the world.


The visionary trio crossed all gender and race lines to inspire generations to dream big.