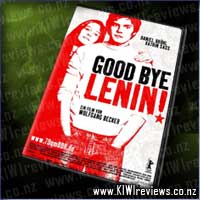 October, 1989 was a bad time to fall into a coma if you lived in East Germany - and this is precisely what happens to Alex's proudly socialist mother.

Alex has a big problem on his hands when she suddenly awakens eight months later. Her heart is so weak that any shock might kill her. And what could be more shocking than the fall of the Berlin Wall and the triumph of capitalism in her beloved East Germany?

To save his mother, Alex transforms the family apartment into an island of the past, a kind of socialist-era museum where his mother is lovingly duped into believing that nothing has changed. What begins as a little white lie turns into a major scam as Alex's sister and selected neighbours are recruited to maintain the elaborate ruse - and keep her believing that Lenin really did win after all!

Set just after the fall of the Berlin wall, this quirky German classic had me laughing from beginning to end, and I don't speak German.

The story of Alex's efforts to convince his mother they are still living in socialist East Germany is touching, hilarious and convincing. I watched this with my Chinese boyfriend and his parents, who remember Communism all too well, and this really seemed to touch a chord with them. I really enjoyed the escalating ridiculousness of Alex's cover up, from switching new brands of pickles into old glass jars to filming fake news stories to explain the encroachment of capitalism into a socialist state.

Ultimately, this was a heart felt, innocent and genuinely european film with a good deal of sentimentality for the sweeter side of socialism. A very satisfying conclusion to a film that taught me a lot about a place and time I had never really encountered before. Must see movie!