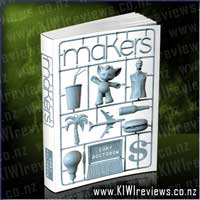 'New Work' is a New Deal for the technological era. Soon barefoot bankers are criss-crossing the nation, microinvesting in high-tech communal start-ups like Perry and Lester's. Together they transform a country, and journalist Suzanne Church is there to document it. But a new economic system requires a whole new belief system -- and there are plenty of non-believers out there. The New Work bust puts the dot.com-bomb to shame and soon Perry and Lester are out of funds and out of business. Down but not out, they go back to what they do best - making stuff.

But when a rogue Disney executive grows jealous of their once more soaring popularity and convinces the police that their amazing 3-D printers are being used to run off AK-47s, things get very dark very quickly!

This brilliantly entertaining and original novel fizzes with bold ideas about the future and how our lives will look as part of it. But at its heart are three characters, Perry, Lester and Suzanne, on an unforgettable journey that will bring them together only to break them apart as they each try to discover how to live meaningfully in an ever-changing world filled with both beauty and horror - where some things really are immutable!

I have always loved stories that explore the limits of new technologies, but this is the first one I have really enjoyed where it explores new limits of old technology. The ultimate in e-waste recycling really.

Though the story is set some indeterminate time in the future, I get the feeling it's 40-50 years from now... or maybe 10 and the American society crashes faster than expected. Either way, the economy is utterly shot, the rich are filthy rich, the poor are legion... even highly-silled technical and middle-management are now homeless, living in shanty towns, squatting on empty lits who's owners are either absentee, unknown, or so far in the... trouble... themselves that the ownership paperwork is lost in land court. Even the simplest toy has more *potential* computing power than laptops from 2-3 years ago, and the techno-hackers are a new breed unto themselves, living a lifestyle part "free spirit hippy" part "crazy baglady".

The story unforlds around the main charatcers of Suzanne, a reporter who just happened to be in the right place at the right time, and tough enough to ask the right questions... Landon Kettlewell, entrepreneur millionaire and new owner of Duracell and Kodak, now merged, and dubbed Kodacell by the ever-obnoxious Freddy, a rat-faced, foul-smelling reporter who is determined to tear down everyone he thinks sits above him on the food chain... which is basically everyone doing anything remotely successful in these tough times.

By far the two main characters though are Lester and Perry, visionary 'makers' who can take almost anything ordinary and make it into something extraordinary. Lester is the creative genius, while Perry is the visionary and eventual prime mover of the story. Everything eventually revolves around Perry, so it's worth paying special attention to him in the early chapters, to better understand why he does what he does in the later stages, when things are getting rougher.

Personally, I found the book utterly enthralling, and once it comes out in standard paperback at a slightly more affordable price, I think it'll be a winner with the sci-fi crowd who want something a little more down-to-earth and grittier. There is no 'smooth' in this story... characters come and go, swap teams, backstab, counter-backstab, disappear and reappear almost at random, but always at a time and place the furthers the plot significantly... this is one very masterful piece of fiction that could turn out to be as prophetic as any of Arthur C. Clarke's early works.

Overall, an excellent book to investigate if you want something 'different' to read over the summer months. The characters are very well developed, the plot holds true to 'real life' far more than some projected ideal (ie. Sh*t happens, in the best examples of Murphy's Law) and that gives it far more credibility than I would have thought at first. A rollicking rollercoaster of hope and ambition, betrayal and doublecross, with a surprisingly satisfying twist at the end. Great reading.

Marco never wanted to be an Animorph. He certainly did not want to be one of a handful of kids who are the planet's only defense against a secret alien army. He's worried about his dad - the only family Marco has left. If anything happens to him, his father will be alone. But something is ... more...