Home > Categories > Movies > Family > Night at the Museum : 2 : Battle of the Smithsonian review

ProdID: 2384 - Night at the Museum : 2 : Battle of the Smithsonian
Director: Shawn Levy 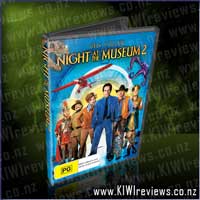 Night at the Museum : 2 : Battle of the Smithsonian product reviews

History is larger than life - and twice as funny - in this minumental comedy sequel that's even more fun thah the original.

Ben Stiller returns as Larry Daley, a former night security watchman at the Museum of Natural History, where the exhibits come alive after dark. But now Larry's nocturnal friends are being retired to the archives of the Smithsonian Institution, luring him back for a hilarious, all-out battle against a cranky Egyptian Pharaoh who plans to take over the museum... and the world!

My son loved the first Night at the Museum film, I couldn't count how many times he's watched it, so when this aired on TV over the New Year I knew I needed to record it for him and he proved me right with how excited he was when I put it on to watch last night (though I do hate having to fast forward past the ads). The premise is still there, the magical tablet which allows everything in the museum to come to life, Larry has been spending the last two years with his new business and upon a visit finds out they're being shipped to the archives, naturally that's when the fun comes in.

There's some rather amusing moments, though I did find the three cherubs really irritating and I could have happily done without them. I loved Amelia, thought she brought a light-hearted side o the movie that I feel really helped to keep the spirits up. I do love that all the characters were based upon real people in our history, which brought out the curiosity in my children who were keen to know more about who, what and why. The acting wasn't anything above and beyond but that didn't matter too much as the film was so fast paced that it didn't stand out, but the characters from the first film just seemed like they only got lines to make people happy, when none of them were really needed (other than one).

The kids were thrilled with this and I know I will need to try and get it on DVD for them.

When this movie came out I was excited to go and see it with my daughter. I really enjoyed the first one in spite of myself. And although I know sequels often mean death, I was optimistic. I did really want to re-visit some of the characters from the first movie as well to see how they had gotten on since last we saw them.

Now, Stiller's character has his son's respect as well. Which meant that the story needed to take a slightly different tack. As predicted, a lot of the previous characters are included in the storyline, but we move to a new museum as well. This allows the story to include an array of new characters, who add some real excitement to the movie. Plus, if you know much about history it is pretty interesting seeing how the screenwriter thought that character might behave.

Again, you have the whole race against time going on through the movie. Good vs Evil struggle and characters learn about each other and themselves. Plus the feel good moments, which most American family films can not escape including. This movie was not as good as the first one, but it was an okay addition to the franchise. I would hope though, that this will be the last they produce. I'm just not sure what else could be achieved from here. Especially as the first movie was based on a children's picture book, which wouldn't have given them much to go on in the first place.

I actually saw this movie before watching the first "Night at the Museum" and found it to be thoroughly enjoyable light-hearted comedy.

Perhaps it was the mood I was in... I thought the Monty Pythonesque Ahkmenrah was hilarious, and the Einstein bobbing heads (I sooo want one of those!). I agree with the previous reviewer to a degree that Amelia Earhart could have had a little less to say.

Overall a good fun movie, worth a view.

The price has fallen a little ($29.99 as of this review), but still overpriced in my opinion for a standard (non-BluRay) DVD.

Filled with cringe-worthy moments, cheesey lame jokes, and an annoying non-stop talking Amelia Earheart (does she REALLY have to find the most wordy, fancy way to say something simple EVERY time??), Night at the Museum 2 is a typical Ben Stiller movie, and only barely tolerable. A new bunch of historical figures make an appearance this time round, as Larry Daley tries to save the friends he had abandoned for a new job running his own business, when they are shipped off to "retire" in the Smithsonian archives. Hopping into pictures, being serenaded by a trio of "cupids", giving a pep-talk to General Custer, and being kissed by a thankful octupus are just some of the strange adventures Larry has in this rather lame sequel. The only real plus is that this time there are two cute capuchin monkeys to slap Larry around!
Robin William's performance is definitely not up to his usual standard as Theodore (Teddy) Roosevelt, and was rather shallow. Owen Wilson is his usual goofy, cheesey self as the teeny tiny Jedediah Smith, with his sidekick, Octavius (played by Steve Coogan), out taming squirrels in an effort to save his beloved friend.
If you enjoyed the first 'Night at the Museum' or are a fan of Ben Stiller, then it's possible you may enjoy the sequel. I would still say it could be a good addition to the kids' collection though, as my 9 year old son loved this as much as the first movie, but it's not one I'd recommend rushing out to buy.

From the makers of Four Weddings and a Funeral and Notting Hill comes the screen adaptation of Helen Fielding`s international best seller starring Golden Globe winner Renee Zellweger (from Nurse Betty and Jerry Maguire) in the title role as the dynamic, irrepressible and outrageously original Bridget Jones. 32-year-old Bridget smokes too much, drinks too much and has a tendency to say whatever's on her mind. As a New Year`s resolution she decides it's time to take control of her life - and starts keeping a diary.