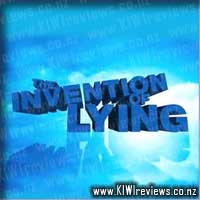 A comedy set in a world where no one has ever lied, until a writer seizes the opportunity for personal gain.

I really, really enjoyed this movie. When I first read the back of the DVD case at the DVD store, I loved the premise. No one has the ability to lie, and there is no such thing as imagination when it comes to books, movies, tv etc (because what are those things other than lies?).

One man, when distraught at his mothers impending death tells her that there is an amazing place that she will go to when she dies aka Heaven, and therefore creates the worlds first 'lie'. His life immediately changes and he now has the chance for fame, wealth and the girl of his dreams. All he needs to do is to keep on lying. And so everything grows, bigger and bigger. And the laughs keep on coming.

Don't worry, it has a moral, which is should you lie to get what you want? And at the end of the day, he decides that lying isn't worth it if she doesn't truly love him for who he is.

This is a fun movie, and one that I will happily add to my DVD collection.

Ricky Gervais, of 'The Office' and 'Extras' fame has moved on to bigger and better things with his Film Directorial debut, 'The Invention of Lying'. The premise, that a world exists where everyone must tell the truth, until one man discovers how to lie, appealed to me. I did wonder why 'telling the truth' included blurting out things that no one even asked, like 'I've always hated you' and why it limited people to judging others based soley on external markers like appearance and wealth, but apparently lying and imagination are the same thing, because the 'film' industry can only produce movies about historical events and they can't even re-enact them, they have to get famous 'readers' to read scripts about them.

Thus, when our dear hero invents the possibility of lying, he also discovers creativity, and with it, writes an historical play about aliens, ninjas, and dinosaurs, all set in the 1300's and labelled 'The Black Plague', passing it off as genuine, undiscovered history.

By the end of the film, I was amused, intrigued, and completely out of popcorn (a sign that the movie was rather long). I think this one is worth a look if only because it makes you think about the things we take for granted and gives you a few good laughs along the way.

After tragedy forces young Prince T'Challa to assume Wakanda's throne, he is faced with the ultimate test, putting the fate of his country and the entire world at risk. Pitted against his own family, the new king must rally his allies and release the full power of Black Panther to defeat his foes and embrace his future as an Avenger.