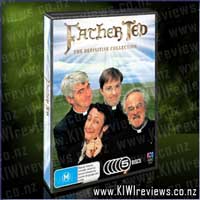 Contains all 24 episodes of the cult comedy show, plus the Christmas Special and loads of extras.

Life is hard for Father Ted. Banished to windswept Craggy Island (for reasons which never quite become clear, but might have something to do with missing Church funds), he is forced to share a house with three of the most difficult people in Ireland.

The island is populated by many eccentrics and its only place of interest is The Holy Stone of Clonrichert, which is basically a small rock on a pedestal.

Father Ted has to be the most original comedy EVER. I mean, how could three priests in a house on an island in Ireland be funny? Certainly none of the priests I've ever met would ever live up to that level of humour in fact, many of those I have met are in sore need a humour transfusion - and not necessarily a good advert for comedy.

So, here we are with three highly improbably priests thrust into equally improbably situations with extremely humorous results that made Father Ted one of the best comedies to come out of Ireland (OK, so it was made in England, but the writers and stars were Irish).
The humour, whilst at times is slapstick, is still far more intelligent slapstick than American's could ever hope to achieve. Along with sharp dialogue there comes an almost farcical twist to every story and that made stars out of Dermot Morgan, Ardal O'Hanlon, Frank Kelly and Pauline McLynn.

Having the complete series together in one boxed set is a real treat to fans of excellent comedy: This set contains all three series. Dermot Morgan, (Father Ted) died very shortly after the last episode was filmed spelling the premature end to Father Ted, and yet there are some 2007 specials on the boxed set that are worth seeing.

This is one comedy that can never be taken over by the Americans and re-filmed in a house in California or Brooklyn or somewhere. It is a truly unique comedy brought alive by the unique comic talents of the cast. For this reason alone, Father Ted works well.

Fans of British comedy will snap this up quickly and is an essential edition to the archives. Ok, I do give a lot of perfect tens, especially for comedies, but this is one truly deserving of a perfect 10.

Score: 9.3
Product reviews for listing 627: The Day of the Triffids -  Type of Show: Sci-fi Thriller

The BBC's adaptation of John Wyndham's classic novel has been hailed as an atmospheric, gripping and faithful production.

Following the earth's close encounter with a comet, a meteor shower strikes Britain's population blind. Bill Masen, recovering in a London hospital from a vicious attack from a new species of plant, is one of a few to survive with eyesight intact. The world he emerges into has already terrifyingly ... more...