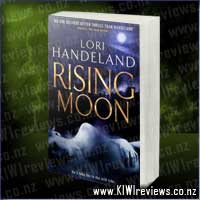 Disclosure StatementFULL DISCLOSURE: A number of units of this product have, at some time, been supplied to KIWIreviews by the company for the purposes of unbiased, independent reviews. No fee was accepted by KIWIreviews or the reviewers themselves - these are genuine, unpaid consumer reviews.
Available:
October 2008

Over a city of wicked pleasures and dangerous passions. Denizens of the Big Easy know its steamy nights can hide any number of sins and secrets. Private-eye Anne Lockhart is counting on it. Her life has been on hold ever since her sister Katie disappeared without a trace, but when a clue leads Anne to a jazz club in the French Quarter everything changes. Rising Moon's proprietor, John Rodolfo, is mysterious in his own right, a gifted musician who reaches deep into Anne's soul and whose mere presence taps into desires she can't afford to indulge - there's a bad moon on the rise.

By going undercover at the Rising Moon, Anne can get close to people who know what goes on after dark - people like John, whose nocturnal disappearances are more than a little suspicious. But unlocking John's secrets is harder than Anne had anticipated. What's far too easy is surrendering to him. And now someone - or something - is stalking the innocent and the guilty, and waiting for Anne's next move.

The Adventures of Ook and Gluk - Kung-fu Cavemen from the Future
Rating: 7.5

With a subtitle like "He awakens something within her...", I guessed that this book would probably be thin on plot and thick on juicy sex scenes. I wasn't too far wrong, but I admit I was pleasantly surprised by the realism of the location - New Orleans, post 'Katrina'.

The book was dark, smokey and intriguing enough to carry me to the end within a couple of hours. The erotic content was probably R18 (if books had classification) but not uncomfortable or overdone. It was, however, a little random. Like Bella and Edward of Twilight fame, most of the way through, I found myself wondering what exactly attracted these two people to each other. It seemed like he was playing her to get to her sister but at the same time, honestly and dare I say 'irrevocably' in love with her, while she, just like Bella, seemed high on Supernatural Creature pheremones which completely overrode any instinct for self-preservation.

The fact that our heroine, Anne, was a Private Investigator, did lead to some amusing trips away from her amor's bedroom in order to try and find her 'long lost sister', though most of the time, I think she forgot she even had a sister.

By the end of the book, I felt that the threads had been tied up in a way I had pretty much guessed from the pitch and a couple of clues along the way. This is very much a heat of the moment story which benefits from not too much analysis. Having said that, I felt that Lori Handeland did some excellent research into New Orleans and Voodoo magic which made the whole story seem a lot more grounded.

A good read if you're looking for a more 'adult' paranormal romance - sexy and definitely minus the adolescent pining.

One man will transcend death to seek vengeance. One woman will transform herself to gain power. And no one will emerge unscathed...

Thorvald Spear wakes in hospital, where he finds he's been brought back from the dead. What's more, he died in a human vs. alien war which ended a whole century ago. But when he relives his traumatic final moments, he finds the spark to keep on living. That spark is vengeance. Trapped and ... more...