« Fanny Hill: Memoirs of a Woman of Pleasure review 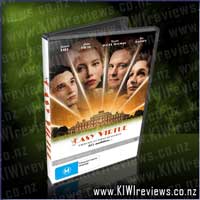 Disclosure StatementFULL DISCLOSURE: A number of units of this product have, at some time, been supplied to KIWIreviews by the company for the purposes of unbiased, independent reviews. No fee was accepted by KIWIreviews or the reviewers themselves - these are genuine, unpaid consumer reviews.
Available:
19 Nov 2009

John Whittaker, a young English man, falls in love with and marries a sexy and glamorous American woman, Larita. However, when the couple arrive at the family home, his mother Veronica has an instant allergic reaction to her new daughter-inlaw.
Larita tries her best to fit in, but fails to tiptoe through the minefield laid by her mother-in-law. Larita quickly realises Veronica's game and sees that she must fight back if she's going to keep John. A battle of wits ensues and sparks fly. Veronica manipulates every situation to undermine her, while Larita remains unbelievably calm and engineers sassy counter-attacks. Before long, Veronica's manipulation starts to work on John and Larita feels their love is slipping away. In a grand finale, where the secrets of Larita's past are revealed, she finally makes a break for freedom from the suffocating house, followed by none other than Veronica's long suffering husband.

I saw this film at the movies and then again on DVD and thoroughly enjoyed it both times. A script so unique and witty that it had to have come from a play, this was a thoroughly British comedy where, strangely enough, the American heroine wins.

The four leads were all superb, from Ben Barnes jubilant enthusiasm, Jessica Biel's intelligence, beauty and genuine 'coolness' to Colin Firth's 'dark horse' and Kristin Scott Thomas' manipulative, judgmental mother-figure. The pace was good. I didn't feel that anything important had been left out, but at the same time, it didn't drag like some period films can.

The music in this film was a particular favourite - songs such as "Mad about the boy", "Carwash", "Sex bomb" and "When the going gets tough", many of which were actually sung by cast members (Jessica Biel and Ben Barnes in particular). There was such a joyful and determined feeling to this film, despite it tumbling irrevocably towards its rather dramatic finale (who knew Colin Firth could tango? He is amazing!)

Definitely a favourite. I am already recommending it to people for a good, fun and different watch.

Score: 5.0
Product reviews for listing 6078: Land of the Lost
Directed by Brad Silberling

Will Ferrell stars as has-been scientist Dr. Rick Marshall, sucked into and spat back through time. Way back. Now, Marshall has no weapons, few skills and questionable smarts to survive in an alternate universe full of marauding dinosaurs and fantastic creatures from beyond our world - a place of spectacular sights and super-scaled comedy known as the Land of the Lost.

Sucked alongside him for the ... more...