ProdID: 2369 - Fanny Hill: Memoirs of a Woman of Pleasure
Directed by James Hawes 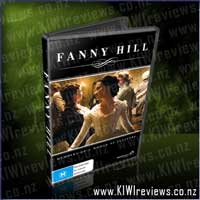 Fanny Hill: Memoirs of a Woman of Pleasure product reviews

A classic drama about a young, orphaned country girl, Fanny Hill, falls into prostitution and works her way up the social ladder of bawdy 18th Century London.

Based on the classic novel by John Cleland, Andrew Davies, the award-winning script writer, (Pride and Prejudice, Dr Zhivago, Bridget Jones's Diary, Tipping The Velvet), brings his good humour and naughty wit to a plot which is a seductive rollercoaster of youthful experimentation and sexual liberation.

Forced to take a succession of lovers to survive, Fanny Hill, played by newcomer Rebecca Night, is introduced to the oldest profession in the world by Mrs Brown, played by Alison Steadman (The Life and Death of Peter Sellers, Pride And Prejudice). Although at first Fanny wholeheartedly enjoys the fruits of her labour there are also complications, heartache, disappointment and frustration as she earns her respectability and independence.

Produced for BBC4 on a rather low budget, director James Hawes and writer Andrew Davies have brought the sprawling and erotic novel Fanny Hill to screen in an elegant, endearing and ultimately satisfying way. Newcomer, Rebecca Night, transforms on screen from a terrified innocent to an experienced courtesan without losing any integrity or audience approval. I found myself genuinely wanting her to succeed no matter what circumstances had forced her to do. The two part show - running at about an hour per part - certainly showed a good deal more skin and sex scenes than I was used to, but at no time did they make me feel uncomfortable. I enjoyed the journey and the conclusion (which is rare for a story of this era and subject matter - Tess of the D'Ubervilles, for example, was really depressing)

I enjoyed watching the 'behind the scenes' clips because they brought a lot more depth to what I had seen. I hadn't realized what it would be like for actors, doing a film with so much nudity. Even though nothing R18 is shown on screen, on set, they can't be shy. Seeing interviews with the director and set managers etc also made me realize how much of a limited budget they had, and helped me appreciate the illusion that is film. Many of the sets, for example, were re-dressed and shot in the next day for a completely different location.

All in all, I thought this was an excellent production that is well worth a watch, especially if you like historical drama.

Belle, whose father is imprisoned by the Beast, offers herself instead and discovers her captor to be an enchanted prince.