Fanny Hill: Memoirs of a Woman of Pleasure review 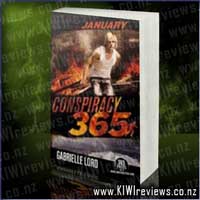 On New Year's Eve Cal is chased down the street by a staggering, sick man with a deadly warning. They killed your father. They'll kill you. You must survive the next 365 days! Hurled into a life on the run, with a price on his head, the 15-year-old fugitive is isolated and alone.

Hunted by the law and ruthless criminals, Cal must somehow uncover the truth about his father's mysterious death and a history-changing secret. Who can he turn to, who can he trust, when the whole world seems to want him dead?

Callum Ormond has been warned. He has 365 days. The countdown has begun...

The Great War for Civilisation
Rating: 9.8

This book is another one of those that is perfectly written for the 7yo up age range, it's not too confusing and it doesn't use too many difficult to understand concepts or ideas.

It is well laid out and it grabs the reader right from the very beginning and it just doesn't let go until the last page.

This series reminds me of another successful Scholastic book series The 39 Clues which has many of the same hallmarks as this, a young lead character(s), periless danger and secrets.

With the success of the 39 clues this series can't help but be a success and I look forward to seeing the rest of the series.

Though I am more than a few years beynd the target audience of this series, I still found a lot to be applauded about it.

For a start, the book is set in a very clear typeface, easy to read for younger kids and early readers. I also noted that the diagrams and drawings are clear, though their placement was sometimes a little chaotic in relation to the relevant passages of text.

The story is quite smooth-flowing and simple enough for young readers to grasp, yet it still manages to have enough texture and twists to keep it interesting.

Overall, quite a good little franchise. Following in the footsteps of The 39 Clues, it also has an interactive website and offers a number of prizes to participants... though I have to admit that the website doesn't have too much to offer at this early stage. Looking forward to seeing something more than a trivia quiz in the months to come.

Definitely no boring beginning here. Page one and a crazy old guy is accosting our hero on the street. This book is a fast read for young adults with minimal pause for detailing as it hurls the reader into disaster after disaster, leaving us swimming in clues that don't quite link up... yet.

This series reminds me a lot of the 39 Clues series - how could it not, it even has a website - but I get the impression it has been targeted at a slightly older age group. Personally, I liked the 39 Clues a lot better because they take the time to develop their characters and draw the readers in. About the only thing going for Callum (the protagonist in 365) so far is his caring for his much younger sister... but even that is very surface level and becomes somewhat irrelevant about half way through. Similar in many ways to Alex Rider and other sorts of young male books, I see little so far to appeal to the young female audience, but there is the potential for that to change as the series progresses - we'll see.

Still, the book was a speed read and left me more than willing to stay with the series. Cliff hanger ending, of course, but for a twelve part thriller, I wouldn't expect any less.

Conspiracy 365 is about 15-year-old Callum Ormond who is plunged into a race against time, but followed by dangerous criminals and with only the slightest hint about his father's past, he might just be in grave danger for his 365 days of hiding! The book started off as an AWESOME story because it had lots of heart-pumping action that blew my mind. The book was something that I could not wait to read, and it was so cool that I skimmed through it, and soon it was finished. The cover was nice too, lots of bright colours and it also told a bit of the story as well. One thing that annoyed me was that the book ended with me wondering 'What happens next? Can Callum do this? Will Callum survive this? Will Callum survive that?' Even though this is the first book it's almost like the whole story, except for the end that is. It seems that Scholastic books are always the best, but I would say that this book is the best of the best. Don't forget to breathe everyone, it's time to get ready for 365 days of burning-hot action and a heart-pumping story.

Cal is undercover on Shadow Island, investigating the secrets hidden beneath the surface of this tropical paradise. Evading search parties, planning rescue missions and sneaking through a maze of underground tunnels is now an average day for Cal.

Trapped in the office of the suspicious director, how can Cal evade capture and continue his double-act with his twin brother, Ryan? As dangers multiply at every turn, at least he knows he can count on SI-6, or can he?

The clock is ticking. Any second could be his last.