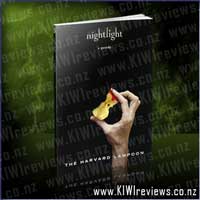 "About three things I was absolutely certain.
First, Edwart was most likely my soulmate, maybe.
Second, there was a vampire part of him - which I assumed was wildly out of his control - that wanted me dead.
And third, I unconditionally, irrevocably, impenetrably, heterogeneously, gynecologically, and disreputably wished he has kissed me."

And thus Belle Goose falls in love with the mysterious and sparkly Edwart Mullen in the Harvard Lampoon's hilarious send-up of 'Twilight'.

Humm.... this parody has the distinct flavour of one who was trying too hard. I found myself giggling at a rare moment of accidental humor, but the rest of the way was pretty hard going. Honestly, I think the authors sacrificed all attempts at coherence and plot for bizzare and often nonsensical gags. Edwart was probably the cutest character, with his nervous, geeky attempts at fulfilling Belle's yearning for a domineering 'dangerous' boyfriend. He honestly tried so hard... Which inevitably led me to hating Belle. She was self-centred, deluded and incredibly annoying.

What can I say? This 'parody' fell a bit flat except for the adorable, hilarious and oh so tragic character of dear Edwart. If they had just simplified and stuck with the idea of a girl who is addicted to the twilight series deciding that a boy in her class is a vampire, based on the 'obvious' signs, and then pursuing him relentlessly - and him trying so hard to please her because a girl has never been interested in him before... it would have been perfect. Get rid of all the try-hard humor that doesn't stick and parody the readers themselves. Who wouldn't want to read about a twilight-addicted school girl who thinks the class nerd is a vampire?

Well, ummm, not to sure what to say on this one.
For those who think the Twilight book and/or movie was utterly dreamy, this book is NOT for you. It unashamedly takes away any possible pretense of 'serious', 'dramatic' or 'romantic' and replaces them all with heapin' helpin's of just plain silly. I found myself struggling to try get past all the utter nonsense and locate some form of coherent storylin, it took me until nearly half way to realise I was never going to find one worth reading, and should just metaphorically 'sit back and enjoy the ride' and just take the humour for what it was, a mindless parody without any real wit or intellect behind it.
Yes, that is perhaps a harsh judgement, but honestly, there is little in the way of rational humour in this for my mindset, however it will probably appeal to a subset of youth who find blatant ridicule a pleasing form of entertainment.
All in all, sorry to say, not in the least my kettle of fish, but I can see it will have a market with a definite non-minority group.

"You're in the Museum now and anything can happen!"

Goldie Roth lives in the city of Jewel, where impatience is a sin and boldness is a crime. But Goldie is both bold and impatient. She runs away to the mysterious Museum of Dunt, where she meets a boy named Toadspit and discovers dangerous secrets.

A monsterous Brizzlehound stalks the museum's corridors, and only a thief can find the way through its strange, ... more...