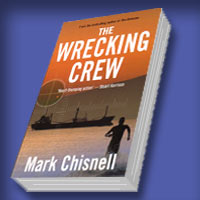 Disclosure StatementFULL DISCLOSURE: A number of units of this product have, at some time, been supplied to KIWIreviews by the company for the purposes of unbiased, independent reviews. No fee was accepted by KIWIreviews or the reviewers themselves - these are genuine, unpaid consumer reviews.
Available:
January 2004

Pirates used to kill with cutlasses and cannons - now they use sub-machine-guns and the Internet. The result is the same - a murderous reign of terror.

Philip Hamnet left port at the helm of the MV Shawould, apparently master of his vessel and his destiny... but others had a different agenda on that evil night in the South China Sea.

Drug warlord Janac has turned to piracy to fund his battle for control of the Austrlian narcotics trade, and Hamnet is faced with a fatal decision. As Janac forces one brutal choice after another, Hamnet is drawn deep into the nightmare world of a man who thrives on psychological terror.

Mark Chisnell's powerful tale of modern-day piracy sweeps from the teeming ports of Singapore and Bangkok, deep into the jungle valleys of the Golden Triangle and back to the lawless seas. Some debts are written in blood, and Philip Hamnet will collect, whatever the cost...

Ever had something you liked, and when it was all gone, you wanted more... it just didn't feel complete yet, with too many unanswered questions? This book is a bit like this... the ending leaves you keen for the next story, so you can see what's just around the corner.

Not having read the previous story, The Defector, which introduced the main Adversary, I was not prepared for the sheer practical malice displayed by Janac. This character provides almost all of the motivation. From the initial attack that started it all, to the final showdown, Janac goads and drives Hamnet every step of the way. From outright prediction of Hamnet's reactions after only a single brief encounter, to probing at Hamnet's ethics and mind and setting up the hoops for Hamnet to jump through, Janac is always the one to make the cause, and the most ready for the effect.

Hamnet, on the other hand, displays some quick thinking, but always bound up in wanting to do the least harm, and massive guilt at the deaths the lead him up to the final confrontation. But, as always, blood comes first. His wife and children's blood before his, which comes before all others. And all to repay Janac, for so many, many things...

Overall, I was quite taken with this one. A good quick read, with a steady pace (which softens it in places that could use a bit more spark) and some detailed characters, this story does however leave some blanks, loose ends at the last page that leave you wondering "So what now?"... you turn the last page and are shocked at the sterile blankness of the rear dust sheet. "But there needs to be more words here!" is a natural thought.

Despite the hanging end, or maybe even because of it, I am going to want to read The Defector to find out more about our intrepid "drug-baron turned pirate", Janac. Well done Mark & HarperCollins. :)

If you have ever been bamboozled by the use of a foreign word or phrase, or simply want to spice up your vocabulary with some well-chosen bons mots, then this is the book for you.

Thousands of foreign words and phrases have been absorbed into the language and are currently used in English, from the everyday (macho, tete-a-tete, spaghetti) to the relatively obscure (ultra vires, auto-da-fe).