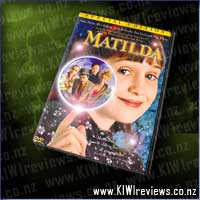 Matilda (played by Mrs Doubtfire's Mara Wilson) is an extroadinary young girl who had the misfortune of being born into a family that doesn't appreciate her and a world that doesn't understand that kids can be powerful too.

But she's about to discover that a little magic can go a long way... and that you don't have to get mad, to get even!

Filled with special effects, loads of laughs and tonnes of imagination, Danny DeVito's Matilda is classic entertainment that adults and kids will enjoy and treasure forever.

(Based on the book by Roald Dahl.)

I'll be honest, I did not enjoy this movie. To be fair it wasn't an awful movie, but for me I was very disappointed by it.

I should start out by saying that I love Roald Dahl, I have read every single one of his children's books many times throughout my life. But in the case of this movie, it just strayed too far from the original story for it to feel relevant. It is very clearly based on the book, but in my opinion, it's not a good retelling of the classic story.

One difference in particular (SLIGHT SPOILER) is a scene around the middle of the film in the house Miss Trunchbull lives in. It's one of the biggest things that puts me off with this movie because the scene feels entirely irrelevant. Whenever the movie is on I always end up muttering to myself about how much I dislike that scene, it wasn't in the books, not even hinted vaguely at, and I feel they could have done something that would have kept the story closer to the original that would have been better.

Another point that turns me away from this movie, and I'll admit it is purely opinion, is that I don't believe Roald Dahl would like it. When his novel 'The Witches' was first made into a film, Roald hated it. He went as far as asking to have his name removed from the credits and then, when it opened in theatres, he would go and tell moviegoers not to watch it because it was a poor retelling of his book.

You may think my opinion of this movie to be harsh, and you're entitled to think so, but it's something that my mind can not be changed on. My family has owned the dvd since soon after it came out and over the years in various locations I have watched the movie in its entirety a minimum of 6 times. Every time I tried to watch it with fresh eyes to give it a chance but it would just continue to annoy me to the point that I now purposely avoid watching it.

I was overjoyed when this came out on DVD and spent months trying to find it, so it's easy to say that this was a movie I loved as a child. I re-watched it with my own children and loved it just as much as I had when I was a child. My mum even watched it, she had never seen it when it first came out, and loved it as well. Matilda is such an endearing character. Kind, thoughtful, never mean and always optimistic.

The extras were also great and I loved seeing how some of the effects were done, such as when the book was flying there was actually a guy on a skateboard underneath it etc.

Great movie at any age.

Matilda is one of my all time favourite kid's movie adaptions of a Roald Dahl book. Danny DeVito gets this one so right. Mara Wilson makes a wonderful Matilda, full of moxie, intelligence and love.

Her family are just awful. Dahl knew how to write truly terrible adults, and DeVito and Rhea Perlman deliver these roles so well. Pam Ferris as Trunchbull is really terrifying and foul too.

My daughter loves this movie. She loves that Matilda is so clever. She loves the magic and Matilda's spirit. Its a funny and fun family movie. And there is plenty in here for adults too. I can watch this again and again, because the performances are good, and the story is such a classic.

Matilda is a stand out classic movie that fits just as easily into a few genres: comedy, family, fantasy.... and any way you label it, it's a great fun watch.

With lots of clever thinking and little bit of magic, Matilda is more than a match for the 'Trunchbowl' (school headmistress). And she has a plan to make some big changes...

Some scenes might be scary for very young children; although in my humble opinion I think the NZ classification* is a little over the top - personally, I am quite sure I would have enjoyed it immensely if I had seen it when I was 7 or 8, each to their own.

* Note this film is rated PG in NZ - parental guidance recommended for children under 15.

I loved Matilda as a child - one of the few films where I was fortunate enough to have read the book first and still enjoyed both versions. Mara Wilson (Matilda) is absolutely adorable, an intelligent, eternal optimist who discovers that she has magic powers and therefore the ability to get revenge for all the years of bullying by her family and her new headmistress.

Good, simple fun. I can't think of anything bad to say about this film. Even now (aged 21) I still love watching this movie. Appropriate for all ages, though a couple of scenes are slightly scary and may require parental supervision for very young children.

From Greg Mottola, the director of Superbad, this is the hilariously human, semi-autobiographical comedy of uptight, over educated college graduate James Brennan whose big plans to spend summer in Europe and discover "real adult life" are upended when his family suffers an economic down turn. Next stop ADVENTURELAND, where James' only summer trip is a minimum wage job manning a game booth so bankrupt, no one is even allowed to win the giant ... more...