Not a Stick review 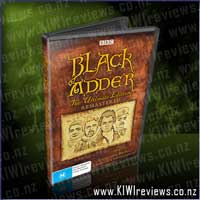 This deluxe edition includes all four series digitally remastered plus a whole host of special features, many of which are exclusive to this collection.

Blackadder is one of the most fondly remembered and critically acclaimed BBC comedies ever to emerge from England. It traces the deeply cynical and self-serving lineage of various Edmund Blackadders from the muck of the Middle Ages to the frontline of World War I.

British comic actor Rowan Atkinson plays all five versions of Edmund, beginning with the villainous and cowardly Duke of Edinburgh, whose scheming mind and awful haircut seem to stand him in good stead to become the next Archbishop of Canterbury - a deadly occupation if ever there was one. Among tales of royal dethronings, Black Death, witch-smellers (who root out spell-makers with their noses), and ghosts, Edmund is a perennial survivor who never quite gets ahead in multiple episodes.

Black Adder is a British 'historical' comedy spanning four seasons, each set in a different period. This 'Ultimate' collection provides 6 discs covering all seasons of Black Adder and plenty of extras.

Disc 1 (Season One): The Black Adder (first aired 1983)
Set in 1485 at the end of the British Middle Ages. The theme is a comical take-off on 'issues of the day', such as witchcraft, the Crusades, the plague, Royal politics and the Church... With tongue in cheek and rather bawdy humour, the history of Bosworth Field is somewhat rewritten. In which the princes in the Tower did not perish, but one of them, Richard IV, succeeds Richard III after the battle and we follow the story mainly of his two sons Harry (the favoured son) and Edmund (the unfavoured son, alias Black Adder).

Whilst humorous in scattered places, I found this first season is quite cheesy; dare I say a bit flat and tedious... I suspect the BBC might have felt similarly, as significant changes were made for the next season.

Disc 2 (Season Two): Black Adder II (first aired 1986)
Set in the 16th century, during the reign of Queen Elizabeth I.
The Queen is played by Miranda Richardson and portrayed as a ditsy, superficial, lover of pranks. Stephen Fry appears as her Lord Chamberlain. Rowan Atkinson is Lord Blackadder (great grandson of the original Black Adder). I found the Blackadder character in this season 100% better than the first one. He is more intelligent, whilst his servant Baldrick is correspondingly less intelligent - a playoff that works well. The scripts are much better (thanks presumably to the writing skills of Ben Elton). In fact from the very first episode, I immediately noticed that the whole production quality is significantly improved from the previous season.

Overall this season is good comedy. The scripts are still a tad on the silly and lewd side for my preference, but those comfortable with this kind of humour will find the episodes quite funny and distinctly more polished than in season one.

Disc 3 (Season Three): Blackadder the Third (first aired 1987)
Set in late 18th and early 19th century.
This time Blackadder Esquire is butler to the Prince of Wales. The Prince is played by Hugh Laurie and is portrayed as a none-too-bright fop. The scriptwriters have largely dispensed with excessive injection of baseness and have created some decent silly fun (not the cheesy silly flavour of season one). The relationship between Blackadder and the Prince of Wales possibly lacks a little in the chemistry compared to his relationship with Lord Percy in the pervious season.

I found the episodes in this season to be quite enjoyable. As usual, the presence of Blackadder's servant Baldrick makes a significant contribution to the humour.
Following the 1987 airing, "Blackadder the Third" won a BAFTA TV award (Best Comedy Series) in 1988. (It was also nominated for 4 other awards.)

Disc 4 (Season Four): Blackadder Goes Forth (first aired 1989)
Set in 1917, in the western front trenches of World War I. Captain Blackadder is in charge of a group of men in the trench. The indispensible Baldrick is there in close support - primarily as chief cook and rat catcher. Blackadder's main goal is attempting to keep out of the line of fire, preferably by getting posted somewhere far away...

This season is the best in my opinion, and worth a view. It does a good job of poking a satirical finger at the 'self-preserving' and 'arrogant' behaviour of decision-makers in war, who keep themselves at a safe distance; contrasting this with the sacrifice and obedience of men in harsh conditions at the front - neatly displaying the madness of the whole situation.

Extras
(discs 1-4 contain some additional extras, such as commercials and commentaries) Disc Five (the specials):
1. Christmas Carol (Parody of Charles Dickens' A Christmas Carol)
2. Back and Forth (I found this a bit odd actually, seemed to be a bigger budget production with special effects etc, but somehow back to cheesy script).
3. The Cavalier years (comic relief sketch)
4. Baldrick's Diary

Final conclusion: the series definitely gets better as it goes along.
I think Season One is more for die-hard fans. The other three seasons are generally good comedy for everyday fans of British humour.

Score: 9.0
Product reviews for listing 288: Spreading Out
Performed by Various

New Zealand's most popular playwright, Roger Hall, takes a witty, insightful look at the Kiwi family 25 years on. He revisits the characters from his phenomenally successful comedy, Middle Age Spread, to see how life is treating them today.

Colin and Elizabeth, now in their 60s, have retired to the Wairarapa and are living on a ... more...