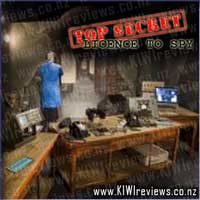 Disclosure StatementFULL DISCLOSURE: A number of units of this product have, at some time, been supplied to KIWIreviews by the company for the purposes of unbiased, independent reviews. No fee was accepted by KIWIreviews or the reviewers themselves - these are genuine, unpaid consumer reviews.
Available:
until Dec 13th 2009

Delve into the world of espionage with Top Secret: Licence to Spy. Become a secret agent as you uncover facts and discover secrets leading to the identity of a master criminal. You will investigate a break-in at the secret headquarters of the Brainiac Corporation, home of the new CROWN computer, more powerful than all computers on Earth combined.
Each exhibit provides intelligence that leads the visitor on a journey of discovery into the secret world of spies.

Image: Delve into the world of espionage with Top Secret: Licence to Spy.

The Island with Bear Grylls
Rating: 10.0

I am, by no means, within the target audience of this exhibit... it's aimed at kids in the pre-teen years, though there were a few young-teens exploring when I took my eldest son through.

As you approach the exhibit, you are greeted by a wall with a big image projected on it, covered in what appears to be police crime-scene tape. However, as your shadow is cast on the opposte wall, patches of an underlying image appear. By moving arouond, you can eventually build up a fairly complete image of the entire picture, and begin to find the specified bits, and the hidden message. Thus begins your quest...

During the course of the exhibit, you will discover a great many clues as tho who stole the microchip, where they plan to hide out, and what they plan to do with it. Think "Cluedo" meets "Get Smart" and you've kinda got the idea. It's all hands-on for the kids, and with the unfortunate exception of one exhibit piece left out due to technical issues, and two others that were refusing to operate correctly, it's just jam-packed full of great ways to keep the kids busy for at least 2 hours!

There are codes to break, passwords to hack, encrypted messages to decypher, conversations to overhear by technical means, photos to play with and a LOT of computer-driven stands. My personal favourite of all was the Letter Grille... it's just so lo-tech but so very effective! I simply MUST make one for myself. :) (I was like this with Da Vinci's Bridge after the stunning Da Vinci Exhibition at this same venue 2 years ago.)

The stands were very well planned and executed, all leading towards eventually solving the puzzle, though the "Hacking Password" stand was a little tough for a couple of under-10 year olds I observed giving it a go... and the Laser Matrix was too much for the bigger kids, as there was simply not enough room to move without hitting a beam.

Overall, an excellent exhibit well worth seeing before it travels on! Family value, as everyone can get involved at any age.

Te Manawa brings you Licence To Spy, a fun way to learn what it's like to be a spy. Using the exhibits, you must find out who stole the C.R.O.W.N, a powerful computer. I think that this is just an awesome activity too cool to resist, as soon as you hear about it, you want to go it right now.
When you go to the counter you will be given a small booklet with a barcode on it, and a pencil, the barcode will help you gain access to The Agency computers and with the pencil you must write down all the codes, messages and passwords that you find along the way.
My favourite activities were the Spy Satellite, the Microdot and Guess The Password, where you try to guess the C.R.O.W.N password and install a virus. What I did not like was that the Laser Listening was difficult because I couldn't keep the sound beam focused on the right spot long enough to get the message.
Licence To Spy was made easier because along the way there are hints that tell you how to do that activity. On your search you can do cool stuff like create a photo disguise to fool your enemies and see what it's like to change your voice. I think that Licence To Spy made learning about spies fun, and I hope you think it does too.

Funny and poignant, Niu Sila is about a friendship spanning over thirty years, two cultures and one neighbourhood.

In 1960's Wellington, six-year-old Ioane Tafioka - fresh off the boat from the Pacific - moves in next door to six-year-old Peter Burton.

They begin an unlikely friendship that will change their lives. Peopled with drunken uncles, crooked ministers, left-wing university professors and a ... more...