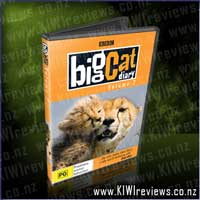 Set in the heart of Kenya's magnificent Masai Mara, Jonathan Scott, Saba Douglas-Hamilton and Simon King return to observe the daily lives and adventures of Africa's big cats: the animals' struggle for survival - their battles for territory, the search for food and shelter and the perils of raising cubs with predators all around...

Volume 2 features a host of new star cats. There's Notch from the Marsh Pride of lions - the lone ruler of his pride faces a takeover bid from invaders as well as feisty, flirtatiouslionesses vying for his attention. And Toto the cheetah cub, just 5 weeks old, so tiny that he could be held in the palm of a hand. Amazingly Chui the leopard is still with his mum Bella.Now bigger than her, he's stealing the best bits of her kills. When will he ever strike out on his own?

With revealing and insightful factual content, carefully woven storylines and cliff-hanger endings - Big Cat Diary has all the elements of a popular drama - humour, pathos, jeopardy and high-octane action.

Although with a different "cast" of cats, "Big Cat Diary: Volume 2" is pretty much the same as Volume 1. Yes, it is still rather enjoyable, watching the adventures of each cat family, waiting with baited breath for the next episode to see whether a particular cub is going to get itself out of a nasty situation... and it's still a good way to learn just how difficult and dangerous it REALLY is being a big cat, especially when they look so tough, majestic, and very much rulers of their territories. But there really wasn't anything different to make it any better or worse than the previous volume.

The "special features" disc was definitely a pleasant addition, as it allowed you to see "behind the scenes" of this series.. I didn't realise it had been running for so long! Here you get to learn more about the big cat experts: Saba, Simon, and Jonathan.. their history with the program and some of the snippets that don't get shown in the main episodes (did they really have to show Jonathan peeing into a cup though? LOL!), along with some of the other cats that aren't introduced in either volume 1 or 2. The extra episode on Chui the leopard was rather repetitive, pretty much what had already been shown in the actual main episodes, and was really rather unnecessary.

If you enjoyed the first volume of this series, then this DVD is still worth getting. If you're an animal lover and haven't seen volume 1, then it won't really matter which volume you get... it's all pretty much the same, and still something worth checking out.

Sea Patrol Series 2 is action packed with a jewel heist at sea, the interception of drug and reptile smugglers, hostage situations, disastrous drink spiking and stowaways! All in 13 episodes!