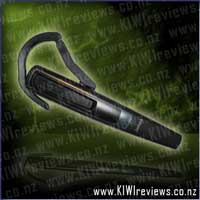 Based on next generation Bluetooth technology, it offers true wideband audio when used with the A335w USB Bluetooth adapter and a softphone. And the extended wireless range allows users to answer calls up to 70 meters from their desks. The design and wearing style is optimized for office staff, managers and specialists who spend most of their time in the office - and less on the go. For optimum call clarity in loud office environments, the microphone is placed close to the users mouth.

The Jabra A335w USB Bluetooth adapter is compliant with a wide range of PC based softphones such as Microsoft Office Communicator 2007, Cisco Communicator, Skype etc.

Don't you just hate it when you get a new gadget to try out and suddenly, all these calls you get daily, both on Skype or on my mobile just dry up? I waited 4 days with no phone calls (didn't help my wife wasn't speaking to me for one of those days!) and finally I have to resort to texting someone to ask them to call me.

At last, I was finally able to try it out!

Firstly, comfort: It wasn't as uncomfortable as one might expect. Rather interestingly, it fitted one ear, but not the other - but this is perhaps an anatomical anomoly of my carcass rather than a fault of the ear-piece. So, in my right ear it sat - for 4 long days with no calls! The earphone wedges nicely into my lug without the need for the ear lock (for want of a better word) to tighten around the pinna (Yes, I know the correct name!), so it sat loosely, but comfortable and more importantly, feeling secure. I did remove it periodically, so I didn't look like a pretentious fool wandering around the supermarket with no-one to talk too. I would rather wander around looking pretentious WITH someone to talk to. For long term use and comfort there is another headest that the bluetooth will plug into - but since I want to look seriously cool, I dispensed with this. I suspect with prolonged use at work I may occasionally succumb to the secretarial look.

The button placement takes some getting used to. There are limited places to putting the buttons, so mostly this is down to the user to learn and I learned quickly where everything was located. I half expected from the previous review that I was going to fumbling terribly with button speed since I have never been a gamer - but again, no problems found.

I was impressed with the speed Windows actually picked it up. Plug in, then a short time later, I had a flag to say it was installed and ready to use. I rarely have this much luck with third-party gadgetry. But this was impressive. I guess this doesn't say too much about the blue tooth headset itself and more about windows. Something obviously went right.

My main communication program is Skype. Skype picked it up quickly and asked, very politely, would I like to use this headset - Yes indeedy. I would, thanks.

To use it via Skype took a fair amount of prodding my customers to call me. Normally, I have customers prodding day in, day out and sometimes through the night demaning attention. But again, four long days of eirie silence. Not a peep from them, not even a skype ringtone! However, as the previous reviewer said, it works well. I was able to the wander around the office chatting down my earpiece without loss of contact with base. The thing that baffled me most was trying to switch the headset between the mobile phone and the USB dongle. My way may not necessarily be the best way, but it is quick and effective.

So, all in all, I was very impressed with this. Being able to have one gadget to use with my mobile phone AND my office computer is impressive. The ease of use was excellent, however, I do recommend not to do the usual guy thing and just pick it up and use it. There is a lot of helpful info. For me, it was just a shame it was on the CD - it was the last place I looked. I feel this would be an excellent purchase for anyone.

This unit is a real mixed bag... I was quite keen to get my hands on it and put it through it's paces, especially as there are law changes due shortly that will make the use of a cellphone in a moving car an offence under law if you are not using a hands-free kit of some kind. On top of that, this unit also pairs with a PC, using the Bluetooth USB stick. This is an exceptionally easy process, with it all being pretty much plug'n'play, especially if you don't want to use any of the supplied applications. As a first test, I just slapped the dongle into the PC and watched to see how badly WindowsXP would freak out... and was pleasantly shocked when it didn't!

I'll get the PC side done first, and discuss the mobile features afterwards... Within *seconds* of Windows completing the installation and activation of the new 'Human Interface Device', Skype was asking me if I wanted to divert all functionality through the new headset. Of course I said yes, and bingo, I was able to hold a wireless conversation with a collegue while wandering around the other side of the office... that's about 10m easily.

The signal was strong, the line clear (due in large part to some excellent noise-cancellation technology, and the enhanced bandwidth afforded by using the supplied USB BlueTooth transceiver), and the conversation flowing well... until I stepped around a corner that suddenly slapped 4 walls in between me and the computer. Signal drop-out was almost absolute. There was *just* enough signal getting through to retain the connection, but the content was audio swiss-cheese. As soon as I stepped back... bingo, clear line again.

This was proved by me then taking a walk over 20m away from the PC, but with only an outer wall between us, and the signal remained fairly strong at that limit. I tell you, I was getting mighty impressed! It even comes with an over-the-head attachment allowing you to get a far more secure attachment to your skull, in the manner of call-centre headsets. Highly clever design work there.

My only *tiny* gripe was that Skype had confirgured itself to pipe everything through the headset, so I missed three calls while the headset was recharging, because I couldn't hear anything. Not the headset's fault in any way, but something to be VERY aware of... have a backup in place and remember to switch over to it during recharge down-time.

As for the mobile side... having an older model Palm Treo handset, simply for the fact that it does the job well enough I don't feel the need to upgrade yet (Though I would dearly love to get my hands on a HTC Magic -drool- ), meant that there were a few technical glitches to overcome before I could really put this through it's paces. However, once I had an application installed and running to handle voice-dialling, and another that gave enhanced compatibility with the headset, it was all on for test run!

Activating the headset is simple enough, at first glance. You only have three buttons. Volume up/down are pretty obvious, and perform those functions solely. The other button covers all other functionality by timing the pressing. Power on/off... accept/reject/divert incoming call, initiating and dropping an outgoing connection, as well as dropping into pairing mode... I tell you... if you forget even once and hold it too long or not long enough, you go places you don't wanna go. The number of calls I almost lost because I held the button down almost too long... it'll take a bit of getting used to, shall we say.

However, once you have mastered the art of split-second timing (Gamers are going to find this so easy to acclimatise to, I swear it!) you'll be wandering the streets talking to yourself like a pro in no time. You know you are a master of the hands-free when people look at you with that "Is he a well-dressed nut-job, or is that a handsfree kit?" look. I got it at least a dozen times by the end of my third day of testing.

Overall, functionally this little unit really impressed me, despite it's learning curve... but my real gripe is an engineering one. The manner in which it attaches to oneself became uncomfortable after an hour or so. The ear-clip is very clever, designed to be swappable between left and right ears at whim, but in order to get a good grip on your ear, it puts enough pressure on the ear shell cartilage to get quite sore after prolonged use. Especially, annoyingly enough, in the car. So, see if you can try before you buy. If you have a good shaped ear and don't wear glasses, you should be fine.

For a snug fit even in the most active environments, this D-style ear hook will be just the ticket. Made from quality materials with a single-cable design for maximum effectiveness with minimal interference, this is the unit best suited for the chase.