« Doctor Who - The Cybermen Collection review

The Adventures of Merlin review 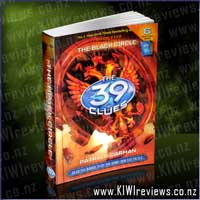 A strange telegram lures fourteen-year-old Amy and her younger brother Dan deep into Russia and away from the only trustworthy adult they know.

Signed with the initials NRR, the telegram launches a race to uncover a treasure stolen by the Nazis, and the truth behind the murder of the last Russian royal family.

All too soon, the treasure hunt starts to smell like a Lucian trap, but the the bait might just be irresistable... what will Amy and Dan risk to find out what really happened on the night their parents died?

Creative Creatures: A Step-by-Step Guide to Making Your Own Creations
Rating: 9.1

The hunt is on, and Amy and Dan Cahill have recieved an irresistable telegram leading them on an unexpected flight to Russia and making a frightening departure from their au pair, Nellie Gomez, but who can Amy and Dan trust, and who is the mysterious NRR?

I thought the cover looked cool because the double-headed falcon looked like it was made of amber. And I think I know why the cover is orange, it's because orange is the colour of amber, I think. In this book I learned that the Road Of Bones is located in Magadan, Siberia. I also learned that the Road Of Bones was built by prisoners whose bones were also used to make the road. I also learned that there was once a monk named Rasputin who was very hard to kill. Back in 1916, Prince Felix tried feeding Rasputin poisoned cake and failed, then tried shooting him in the back, then stuffed him in a bag and dropped him into a frozen river, when Rasputin suffocated. And I learned that the statue called The Motherland Calls in Volgograd is twice as tall as the Statue Of Librity. The Motherland Calls was built where over one million people died in World War Two.

Unlike all the other book codes, the book had no decoder in it. The decoder was on one of the book cards, and like book 4, Beyond The Grave, Amy and Dan's next location is untold, but by the looks of book 6, In Too Deep, which is online at www.the39clues.com, I'd say it has something to do with Loch Ness. Good Luck to all clue-hunters, let the hunt continue.

By far the best book of the series so far, and even more fun to read than the others. My eldest son has been a fan since the first book and has been eagerly awaiting each and every release in order to follow the trials and tribulations of Dan and Amy Cahill.

I personally liked this story as it interwtwined the mystery of the Romanovs and Rasputin which is a story in itself that I find fascinating and I felt it was well incorporated into the story.

Once again more clues are revealed (and not just the main 39 clues) and the end of the book left me waiting for the next installment in this great saga.

Oh and my eldest is also waiting for it to.

At the half way mark already? That was quick - and the book is so engaging that I polished it off very quickly too.

With Amy and Dan sans Nellie and their cat Saladin (they are still in Egypt after Amy and Dan get a tip off and head to Russia) - and from there, things really hot up: with links Rasputin, the Romanovs and even a hint to the fate of their own parents.

And what does the "Black Circle" refer to? I won't give the game away save to say it does have some historical significance and links to one of the branches of the family.

An absolutely compulsive read, one you will finish quickly and also want to re-read and wonder about some of the alliances. If you have come this far, you are guaranteed to want to read the rest of the books in fairly quick succession. Top marks to Scholastic on a novel series of novels with the chance of winning a prize at the end of it.

As with the previous four installments, this book was an easy and engaging read. I love the way history is introduced so naturally - you come away curious and ready to learn more (in this case about Russia). I think these books are an amazing way to open childrens' minds to the world and leave them interested.

The characters continue to develop, something else I have really appreciated about this series. They are beginning to do new things, like drive vehicles and use fake passports. They are growing up and becoming more independent.

I rated this book so highly on rereadability because there are so many clues hidden in the text that take two or more reads to notice. A truely excellent series. I can't wait for the next book!

Here we are, at the half-way mark in the story. As the quest to discover all 39 Clues continues, the storyline just gets more involved and absorbing. Dan and Amy are now getting help from some very powerful people... from both sides of the Cahill fence.

As always, history is a big part of this series, and in this book we are brought to Russia to explore the mysteries of the Romanov family, the last of Russia's royals. In particular, we learn a bit more about Rasputin, famous rogue and mystic, and the youngest of the Romanov's, Anastasia, both of whom are very famous characters in Russian history.

As Dan and Amy follow the clues they are being given by the mysterious NRR, their lives take on more risk than ever before, as they are confronted with more danger, a near-miss with their most vigilant enemy, another forced alliance with a competing group of clue-hunters, and a total lack of Nellie for this adventure. And what's with Nellie's cellphone messages? Some interesting implications from one of the messages Amy discovers.

As with each book, there are a number of hidden messages in each book, however in a bit of a twist, the inside-front cover does NOT hold a decryption key this time, but another coded puzzle instead... the key is somewhere else entirely!

Overall, this has to be the most enthralling of the 5 books so far, and I just can't wait to see what Book 6 - "In Too Deep" - brings to the collective. Oh, and dedicated clue-hunters should be sure to keep their eyes on the 39 Clues website, because there are 5 bonus cards available to those who pay attention... and by the looks of things, there's about 30 more to be revealed over the second half of the hunt!

Screenwriter Megan Silver is a waitress in an L.A. burger joint, and her life is going nowhere fast. But she has an idea worth a million dollars - if only she can get someone to read her script.

Supermodel Roxana Felix is the richest, bitchiest catwalk queen of them all. But it's not enough; she wants to be a movie star and she'll let nothing get in her way.

Studio president Eleanor Marshall is the most powerful ... more...