Doctor Who - The Deadly Assassin review 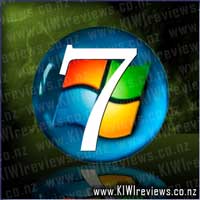 Disclosure StatementFULL DISCLOSURE: A number of units of this product have, at some time, been supplied to KIWIreviews by the company for the purposes of unbiased, independent reviews. No fee was accepted by KIWIreviews or the reviewers themselves - these are genuine, unpaid consumer reviews.
Available:
Free from Microsoft.com

Windows 7 is the new Operating System from Microsoft due for release on October 22 2009.

This is the Ultimate Version of Windows 7.

I have been using Microsoft Windows since Windows 3.1, and I have used every incarnation of it since then, and I have to say that this version of Windows is probably the nicest one I have ever used.

It was obvious from the outset that alot of thought has gone into this version of Windows in order to make it as simple to use as possible. Now while this version still retains alot of the characteristics first introduced in Vista, to my mind they just seem alot more polished. It is also noticeable (whether by design or just by sheer coincidence) that it looks very similar to the latest Mac OS (OSX), which does give it a more user friendly feel. Gone for instance is the XP style Start Menu and Taskbar, it has been replaced with the Vista style Start Menu, and a newly designed Taskbar, first up there is no quick launch toolbar, it is now fully integrated into the taskbar, also you no longer have little rectangle tabs for each program running, instead you have an icon for each program, and if you have multiple instances of each program, instead of grouping them with a number telling you the number of instances, or a tab for each instance you now get a little visual stack of icons for each. And if you've got multiple explorer windows open, just hover your mouse icon over the icon and you will see either a small visual realtime snapshot of each instance (if you have Aero running), or you will get a the Window Title for each instance displayed.

One slight problem I do have is that it is still retaining the Windows Vista Control Panel which I feel is way to cluttered and some of the labels are not the best description. However that being said people will get used to it.

Another wonderful feature is the implementation of libraries. To better understand what Libraries in Windows 7 are, we need to look back to some of the earlier versions of Windows like Windows Vista and XP. These earlier versions included sets of special folders for storing peoples content such as "My Documents", "My Music" and "My Pictures". In Windows Vista, these special folders where automatically indexed to allow users to perform faster more efficient searches on their content. Even so, many people, me included

, store their files, music, and pictures all over the place in various folders like c:\temp or d:\2008\pictures. This is referred to as storing data outside the user?s profile storage space. This affects the indexing and therefore the entire search experience, and often makes the person pull out their hair as they struggle to find those important documents, or their favourite song

So, in Windows 7, Libraries tries to address the problem of people storing their personal files all over the place by creating these unique folders called Libraries which allow people to link/include other folders/locations to the Library. Therefore, we can say that Libraries are user-defined collections of content. By linking/including folders in Libraries, the user is telling Windows where his important data is located. The system will index folders, to enable fast searching and stacking based on file properties. This also means that in explorer when you click on the "Documents", "Music" or "Pictures" Library then all your documents, music and pictures that are in all those folders that you have included in each library is instantly accessable from a single location and searchable from that same location as well.

The System Tray as also had a revamp, you can now define which processes, programs that you want permanently displayed in the System Tray and which ones you want to be kept in the hidden icons.

A little feature that I only just discovered the other day is the ability to change the Wallpaper that is displayed when you Logon to Windows, now this can be done manually, but it does require some editing of the Windows Registry (which if you don't know what your doing then don't do it.). However luckily there are some 3rd Party applications out there that make doing this easy. The one I recommend is the W7C LogonUI Changer which can be found here.

Another thing I have noticed is that this version of Windows is not as resource hungry as Vista. I am running Windows 7 on a Intel Core 2 Duo T5500 Laptop with 2GB of Ram and a Nvidia GeForce Go 7300 graphics card (This laptop is around 2-3 years old now) and while it was described as being Vista capable, when I tried to run Vista on it it ran horribly slowly, however Windows 7 runs like a dream, although not quite as good as XP, I will certainly be switching to the full release of Windows 7 when it comes available after 22nd October 2009.

So in summing up, if you have are looking at buying a new PC, wait until October 22nd, if you already have a PC with Vista, upgrade to Windows 7, if you are using Windows XP and you want to change and your PC/Laptop can handle Windows 7 then buy all means do it.

I have been running Windows 7 Release candidate for just over 6 months. I downloaded the disc image and created an install disc. I did a clean install on a freshly formatted Hard drive (250 GB, 7200 rpm). My system is Core2Duo 3GHz, 64 bit, 6GB RAM.

(Note: it is not necessary to clean install, but I like to do that with a new OS to ensure least possible risk of incompatibilities. It also gives a sense of power and satisfaction, knowing that any gremlins that might have snuk around the defenses of your security system and be lurking in hidden places will be unceremoniously purged!!!!

So far, no problems whatsoever - well, not quite true... actually I had a single blue screen error earlier on, but I did a restart and everything started up fine and has been sweet since. I gave it a 9 for support because there have been very frequent updates - I have actioned all of the important ones - and my system has not suffered any downtime. I do back up files onto a second hard drive, but I have to say the system has been very stable.

The only issue I have had since installing Win7 is that my Konnekt8 drivers no longer work, so I can't use my external sound card on this machine. However, that is not a Win7 problem - it is a failing of TC Electronic to come up with 64 bit drivers for their device (grrr).

I should note that many (but not all) 32 bit programs will still run fine on Win7, even if you are using a 64 bit system. (You install them in the (x86) program files)

The main programs I am running on this machine includes Adobe CS4 Production Premium (no issues so far), MS Office 2003, Firefox 3.0.14, and a variety of utilities. (BTW I have successfully played Guild Wars on this machine also, even though GW does not officially support 64 bit systems - at least they didn't when I last played).

The Win7 interface is nice to look at. There are some pleasant features (see through task bar etc) each with their small price to pay in operating efficiency. As usual, the Microsoft team are out to be 'helpful' and 'user friendly' in thier layout and organisation - a trait that unfortunately often ends up being less helpful for power users.
Personally, I don't find Win7 quite as 'efficient' in layout as XP Pro, in fact some things seemed downright inefficient when I first started using it. Worst of all the lack of thumbnails - what a chore to sort through images! I certainly hope that is fixed in the full release.

I cannot argue with the price - FREE. Still waiting to find out how much it will sting to get the full release when this one stops working next year though.
(Dread going back to XP Pro now that I am used to using 6GB RAM, even though at least 8 would be nicer... but going back to 4, aaaaaaargh)

All up, using Win7 has been a hassle-free experience and as long as the price isn't ridiculous I will get the full OS when the release candidate ceases to function.

The essential tool for motion graphics and visual effects.