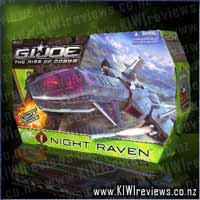 M.A.R.S. Industries has developed an advanced hypersonic high-altitude attach and reconnaissance aircraft to rule the skies. Supremely fast and powerful, the suborbital NIGHT RAVEN cruises at a top speed of Mach 6 and deploys stealth technology, making it undetectable to even the most sophisticated tracking systems.

Equipped with twin rotary launchers, the NIGHT RAVEN strikes its targets with infrared-guided IRG-42X missiles. Rip-roaring adventure is coming your way, by way of this tough and ready-for-anything NIGHT RAVEN aircraft with electronic lights and sounds! Lower the handle so you can "fly" this jet vehicle, put the AIR-VIPER figure in the cockpit and check your retractable landing gear. Then, zoom off and prepare to use this aircraft's lock-and-load firing action and two rotating 6-missile launchers against unsuspecting opposing forces on the ground!

The NIGHT RAVEN aircraft features electronic lights and sounds, a lowering handle, lock-and-load firing action, two rotating 6-missile accessory launchers, a drop-down cockpit for pilot access, and retractable landing gear to create all kinds of havoc as it flies toward its destination!

First off I have to say this is a seriously cool toy, while it may not turn into a dozen different things, or make you sound like Darth Vader, it does have two things going for it to more than make up for all those other things. One it's a fighter jet (a decent size one at that), and two it fires missiles. This to me makes this one awesome toy.

And my son agrees with that as well. When he first saw it his eyes bulged out of his head and he couldn't wait to rip it out of the box and give it a whirl. And give it a whirl he did, he spent the next hour or so running around the house flying the jet and firing the missiles. This was to me a true test of the durability and the enjoyment of the toy, if it lasts longer than 1 hour then it's a hit and will be a well used toy in the future.

So this little gem passed the test and is currently holding pride of place in the toy box (until the next new toy comes along that is.)

This G.I.Joe toy is nothing but awesome, and is much better than any toy I have ever seen! My favourite part is the cocking device because it was disguised as the neck and cockpit, and not only was the cocking device hidden, but the latch that opens the cockpit was hidden too, so it took me a while to figure that out. I also think the Night Raven looked cool, and it looks even cooler when you put the stickers that come with the plane on, because then it looks just like in the movie. The Night Raven also has a figurine of the Cobra character, Air Viper, to sit in the cockpit. Anyone reading this review has SOOOO got to buy this, because no matter how much it costs, this is a really cool toy.

This was one of the coolest toys I have come across in the last year! Though I can't honestly say it has a mountain of features and cool abilities or anything... after all, it's no Transformer or Lego toy, it was simply so cool to play with my 9 year old son had to remind me *he* was supposed to be reviewing it, not crusty old me.

The cockpit hatch opens below the plane, allowing the supplied pilot action figure to enter at ground level without the need for ladders or stairs. the missile carousels are housed in the wing bases, keeping them out of the way and preventing the missile heads from catching on anything as the plane 'flies' by in the hands of the younger 'pilots'.

I was interested to to read that the missile won't fire until the plane has been 'loaded' by pumping the head and neck of the craft like a shotgun... (not in those exact words) because early testing showed that the missiles would quite happily fire without having to cock the launcher, if there was a missile in the top-centre bay when the trigger was pulled... the action of cocking the launcher simply rotates the carousels to position another missile in the trigger release assembly. Because the missiles are spring-loaded at time of insertion, the only thing required to launch them is the release of a catch inside, which is done only in the top-centre position. So, take care when the missiles are loaded, as it *is* possible to launch 2 of them accidentally if you aren't paying attention. Simple answer: NEVER point this toy at another person! As with *all* projectile launchers, it can cause injury if a missile impacts the eyes, or you score an (un)lucky shot in their ears, nose or mouth.

As added bonus, at the rear of the plane you get three buttons which will trigger action sound effects. As well, every time you pull the trigger, whether launching any missiles or not, you will also get audio effects such as missile launch noises and machinegun fire. I admit, I didn't pay enough attention before my son stole it away from me, to be able to state whether the missile launch noises stop when the missile bays are empty, or whether it's a purely random selection each time the trigger is pulled.

Overall, if you have seen the movie, you KNOW how cool this plane looks in action, and you'll love watching your kids playing with it. It's not the smallest model plane you can get, with it's final size being somewhat larger than expected, but it certainly looks the part and plays well. Adult assembly is advised when pulling it from the box though, as some wing parts can be tough to lock into place. The packaging wasn't as bad as some products I have encountered, but nor was it the easiest to free from it's cardboard prison. It's good to see some progress is being made to improve packaging though.

The AR.Drone 2.0 is a remote-control quadricopter, which combines the best of the modeling, video gaming and augmented reality. By downloading the free app for your iPhone or iPad, you can control your AR.Drone 2.0 seamlessly.