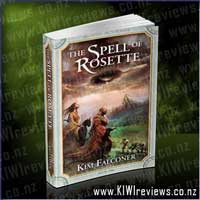 Disclosure StatementFULL DISCLOSURE: A number of units of this product have, at some time, been supplied to KIWIreviews by the company for the purposes of unbiased, independent reviews. No fee was accepted by KIWIreviews or the reviewers themselves - these are genuine, unpaid consumer reviews.
Available:
January 2009

Rosette is a child of two worlds: Gaela, steeped in magic, and an Earth choked with failing technology. The key to their survival is literally in her blood, a spell passed down through her family line to preserve the one they're sworn to protect.

Unaware of her lineage, Rosette runs scared when her family is murdered. She takes refuge with Nell, a shape-shifting high priestess of the ancient blood, who teaches her the arts of witchcraft, stars and swords.

Shadowed by the fabled Kreshkali, queen of the underworld and mistress of the wolf-like Lupins, Rosette and the temple cat, Drayco, find themselves little more than a step ahead of those who will do anything to control the portal that links the many-worlds.

The Amazing Spider-Man vs The Lizard
Rating: 9.5

The Spell of Rosette started off rather slow, which made it rather difficult for me to get into it, and left me wondering if it was a book I was going to have to drag myself through the entire way. A few chapters later, however, I realised I'd somehow become hooked! Yes, Kim Falconer does build things up rather slowly, but in such a way that gently lures you in so that you're not even aware you've been caught by the story until you're fully immersed and in too deep to stop. This book is an interesting mix of fantasy with a hint of sci-fi that at times did go a bit over my head with the technological side of things (technology has never been much of an interest of mine... unless it's photography related! ;) ), but this certainly didn't detract from my enjoyment of the book.
Shape-shifters, magic, a seriously nasty computer virus, sword training, star charts... all of these blend into a story that has several twists and turns, making it occasionally difficult to keep track of just who the "bad guys" are, as Rosette discovers who she REALLY is when she is thrown in the middle of a battle she never asked to be a part of. When Destiny comes a-calling, sometimes it can be pretty hard to say no, no matter how dangerous that Destiny is!

Definitely worth a read if you're a fantasy fan... just be prepared for a little hard work in the beginning. If you stick with it, it's worth it!

An A to Z guide to the Super Heroes of the Marvel Universe - from Ant-Man to Wolverine, with everyone in between! Discover detailed descriptions of everyone's favourite characters including their origins, powers and secret identities. Full of trivia and fun facts on more than 100 heroes, this exciting book is sure to delight Marvel fans, young and old!