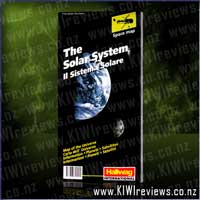 This is a folded paper map, scaled at 1:10 Billion. This chart shows the Mean orbits for the eight recognized Planets and Pluto, as well as most other objects known to orbit the sun: such as comets and meteors. Several formulaic scales are shown on the map for metric distances and a ruler scale in Astronomical Units. (1 astronomical unit is about 93million miles) An inset diagram shows planetary sizes relative to the sun.

Reverse has numerous Datasets: These include diagrams showing the Ecliptic orbits of the Sun and Moon, Planetary orbits along the Zodiac, Apparent Retrograde Motion, Mean Configuration of the Planets, Eclipse and Orbits of Planetary Satellites, Relations of Planets and their Moons, photos of the planets and specific details regarding each one.

There are also extensive texts and charts giving technical statistics and information on Planets, Satellites, Comets, Space Missions and much more. Planetary Positions shown as of 1971; covers space missions to 1981; some revisions made as of 2002. Nearly all given information is multilingual: Primarily German; French, English, and Italian.

Excellent for use by Amateur and Professional astronomers alike. Includes Legend of symbols used.

Children's Map of the World
Rating: 9.3

Taking Flight:
When Wanda wonders how things fly, the class finds itself shrunk inside Tim's model airplane. But when Tim accidentally destroys the toy plane's remote, Wanda and the rest of Ms. Frizzle's class discover for themselves how wings and moving air affect lift and direct flight.

Revving Up:
The School district's Vehicle Maintenance Inspector is about to condemn the Magic School ... more...