The Sky at Night : Apollo 11, A Night to Remember review 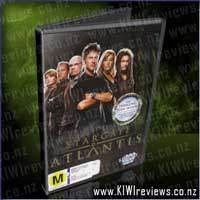 In this action-packed fifth season, sparks fly when Woolsey becomes the new leader of the Atlantis team.

Meanwhile, McKay faces some difficult personal challenges, Teyla must balance her roles as mother and warrior, Ronan's past returns with a vengeance, and Keller find peril, then help, from an unlikely source.

A provisional relationship with the Wraith takes a shocking turn and new adversaries test the team's courage and resolve like never before.

It's kind of strange, watching a series evolve over nearly a decade and a half... not many stories can be stretched out that long and still retain anything worth watching... in fact the only series I can name tnat has lasted anything like this is one that stopped holding any relevance to me about 6 episode's into it's FIRST series!

However, the Stargate franchise with it's spin-off movies and two main storylines, has never failed to grab my imagination and attention. The actors pull it off so easily, I have to wonder at how the sci-fi genre will cope with it's loss. Sure, there's been a lot of 'bleed-thru' between sci-fi series... when 'Farscape' finished, we started to see some hilarious cast match-ups in the Stargate universe... and with the unfortunate demise of "Firefly" before it even really got started, we got a bit of good luck with the delightful Jewel Staite joining Atlantis. But what next?

This season is, alas, the last of the Stargate's we'll see... at least on the TV screen. There are rumours of a Stargate online gaming universe, and some absolutely unfounded rumours that the original SG1 series will get ressurected with a 'next generation' of gate travellers, but so far, this looks like the end as we know it.

So, in true form, all storylines must be tied up, and without killing everyone off entirely. And yes, that is pretty much what happens... despite the cliff-hanger ending, we can expect to be left bereft of a future fix... unless the bigwigs decide to fund a final, all-closing movie. Pretty please, Mr. Executive Producer... sign the cheque willya?

Overall, an excellent pretty-much-ending to a 14-year thrill ride down the wormholes of imagination... the goodies have changed over the years, and the baddies have come, been kicked un the backside, and gone... sometimes to appear again, usually not. If you have enjoyed the Stargate experience, you already know you need to have this in your collection. If you are still staring blankly, it's about time you ask your parents for a shot at the sci-fi section of the video store, and experience some really cool stuff!

In the top level of Exscite you will find fun interactive activities where kids play and have fun, as they learn about science. You'll still find many of the old favourites, but now they have an exciting new look and some fun new features.

Race a friend on the Mario Kart racers.
See how fast you can throw a ball on the ... more...