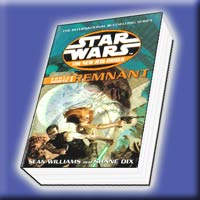 As the bloodied and weary galaxy faces battle once more, the Jedi take on the formidable task of bringing the last of the Empire into the light...

From the ashes of the New Republic - torn to shreds by the savage Yuuzhan Vong forces - the newly formed Galactic Alliance has risen, determined to bring peace to the entire galaxy. But first the Yuuzhan Vong must be contained once and for all. And so Luke Skywalker seeks a world long lost to legend: Zonama Sekot, a sentient planet believed to have repelled an invasion by the Yuuzhan Vong decades ago. Deciphering the enigmatic secrets of Zonama Sekot just might turn the tide of this relentless war.

Aboard the Jade Shadow, Luke, his wife Mara, Jacen Solo, and other Jedi head off into the Unknown Regions, where rumors and clues suggest Zonama Sekot might be found. Yet the mission has barely begun when the searchers stumble into a horrific battle. The Imperial Remnant, in retreat from the mighty Yuuzhan Vong, is about to be destroyed. It would seem those aboard the Jade Shadow have little choice but to leave the Empire to it's fate. But these are no ordinary space travelers, they are Jedi...

Frankly, I was stunned. Yet another great story from these two authors, whom I have only recently discovered. [See our reviews on the EVERGENCE trilogy by these two authors] As with their other stories, this book shows the same traits of suspensful storytelling coupled with a determination to stay within the realm we are all familiar with, created by George Lucas with his Star Wars movies.

While reading this story, I was able to clearly see, in my mind's eye, Han Solo's quirky grin, Luke's serious face as he imparts grave news, Leia's tolerant smile as she tries to diffuse Han's temper... the level of realism is astounding. Even the Solo children, Mara and Jacen, both of whom are members of the New Jedi Order, come to life when stroked by the pen of these astounding authors.

With the mission of seeking the legendary Zonama Sekot, a planet-sized being able to travel by hyperspace and repel attacks by the fierce and bloodthirsty Yuuzhan Vong race, ahead of them, this crew and their supporters are running towards a hazy and possibly fatal future for the galaxy as a whole. With distractions such as saving the Imperial Remnant from certain doom, a possible traitor in their midst and the ever-present C3PO and his usual 'Oh my, all is lost' attitude testing their nerve, this is no easy task.

I am heartily glad the good folks at Random House placed this book up for review, since I would have passed it over in a bookstore, but will now be seeking out more in this series. An excellent read, and worthy of a high recommendation.

Packed with pictures, puzzles, quizzes and fill ins, this monster sized activity book will put your knowledge of the Goosebumps movie to the test. It has tons of trivia, games, activities and much more. Includes one sheet of stickers.