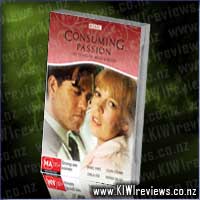 A century of literary romance and desire.
Consuming Passion - 100 Years of Mills & Boon, is a one-off drama that delves into the world of romance, following the meteoric rise of celebrated publishing house Mills & Boon. Written by Emma Frost (Shameless), Consuming Passion portrays the lives of three very different women, touched by Mills & Boon in some way, as they try to incorporate romance and passion into their own lives.

Consuming Passion - 100 Years of Mills & Boon includes the special feature "How to Write a Mills & Boon" - a featurette made for DVD following the literary novelist, Stella Duffy, as she attempts to write popular romantic fiction for publishers Mills & Boon only to find it much more difficult than first anticipated.

I was a wee bit dubious about the premise of this film going in, but I was surprised to find I really enjoyed it. Told in three separate time frames, yet seamlessly wound together, this film manages to address the origins of Mills & Boon, the writers and the possibility of such romance happening in real life.

My favourite storyline was the earliest, following the wife of Mr Boon, a young and wealthy woman named Mary who just wants her husband to make her feel wanted. She grows more and more frustrated as the publishing company takes over his life until she finally breaks and tells him how she feels - this is a revelation... women need romance! Leading, at least according to the story, to the formation of Mills and Boon the way it is today.

I felt quite uncomfortable in many places through Janet's storyline. She is completely socially inept and in love with the Doctor administering to her mother's hip operation. She takes out her sexual frustration through writing a fantasy of their romance - which becomes a Mills & Boon best seller. The concept was cool, but watching the young woman throw herself at a very real and arrogant doctor was simply too much for me and I had to fast foward in some parts.

Kirstie's story was perhaps the most interesting of all, a college teacher with a nice stable boyfriend who suddenly gets an incredibly good looking and overpowering young student coming on to her in exactly the way the arrogant annoying males in Mills and Boon tend to do... You can imagine how that unfolds. This film is rated R-18 for a reason. The sex scene is quite graphic...

Still, having watched this film, you do begin to wonder what makes Mills and Boon sell more books than Harry Potter. It seems unlikely that so many women are mindless and brainwashed... Hmm...

Still, good casting and cinematography. I hate to admit it, but there was one point at the end where I actually cried... gosh, I am such a softie. I definitely recommend to anyone (over eighteen) - you can hate Mills and Boon (my boyfriend detests it) and still enjoy this movie.

Six years ago a NASA space probe crashed to earth with alien stowaways on board - in the time since a section of the Mexico-US border has been fenced off and is now quarantined as an 'infected zone'. Today the American and Mexican military still struggle to contain "the creatures".

MONSTERS follows a U.S. journalist escorting an American tourist through the infected zone in Mexico to the safety of the U.S. border, all the while trying ... more...