Children of the Dog Star review 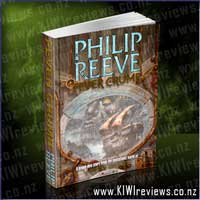 London is days away from war.

A terrifying new enemy is on the attack - huge armoured fortresses that move across the wastelands. Buried in London's past is a secret that may save it from desatruction, and the key to unlock it is an orphan called Fever Crumb.

Set centuries before the events of the Mortal Engines books, Fever Crumb is the prequel and tells how Municipal Darwinism all began.

For anyone who has read the mortal engines series, this story is amazing. It covers the 'birth' of London as a moving city and shows a unique perspective on many of the myths and characters from the later stories. I especially loved the way Reeve revealed Shrike's creation and why everyone in New London says, "Oh Quirke!" all the time.

Even as a stand-alone story, Fever Crumb is completely accessible and a wholly enjoyable read. I loved the young girl, Fever. She was just immediately likable for some reason. The memories of her grandfather swimming around in her blood made for thought provoking reading - especially when she starts trying to deal with seeing her own mother as her daughter as well.

There are lots of new and interesting ideas explored in Fever Crumb and the pace feels a bit older than other books in the series. I thoroughly enjoyed this and would recommend it to anyone. It is a good, easy and interesting fantasy / steam-punk read.

Though this is the latest tale from Philip Reeve in the Mortal Engines universe, a post-apocalyptic world after a devasting nuclear and biological war that erased nearly all of humanity late in the 43rd or 44th century, I decided to read it first since it was a prequel, setting the scene for the rest of the stories, yet not really part of their overall plotline. Having now started in on the rest of the tales, I think this was a smart move since it keeps things in time order, and sets the scenes rather than retroactively explains them.

In this tale the main characters are full of depth and detail, while the 'supporting cast' are covered in just enough detail to get them through their parts, without cluttering the story up by over-detailing a dead-end thread. I find this style of writing and character development utterly enchanting, and it appeals to my sense of 'tidy writing' - give enough to satisfy, but not enough to distract from the key stuff.

Fever is a child with a horrendously complicated past that no single character really grasps, and it is only near the end, when all the key players are gathered and explaining things that it all starts to come together and reveal how all the threads lead to her hands, and even the slightest tug could lead to disaster... or salvation.

In this title we are introduced to the intricate origins of "Stalkers", and the one known as Shrike in particular... we are also witness to the birth of Municipal Darwinism - roving mobile urban complexes that prey on each other, growing by consuming the resources inherent in smaller, slower, or just plain unluckier, urban units both mobile and static. We are also given an insight into the transitional period between the the "Sixty Minute War" and the era of Traction Cities.

Overall, this was a great intro to Reeve's works and I am certainly glad I am getting a chance to explore this author's style. So far, I am quite hooked and it will be with great pleasure and anticipation that I dive into the rest of the 'Mortal Engines' tales. My only gripe is that the book's blurb, noted above, isn't accurate and gives a slightly different impression of the plot. London has two fates... if the invaders win, London lives on, just in a new guise... if the invasion is repelled, London will still survive but will eventually stagnate. The key to London's survival is indeed locked within Fever Crumb, but the saviours aren't the current residents...

Paperback of the spellbinding new story collection, featuring Chrestomanci and many familiar friends and worlds from the novels. The titles are: Warlock at the Wheel, The Sage of Theare, Carol Oneir's Hundredth Dream and Stealer of Souls.