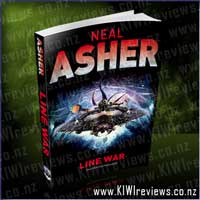 The Polity is under attack from a 'melded' AI entity with control of the lethal Jain technology, yet the attack seems to have no coherence. When one of Erebus' worm ships kills millions on the world of Klurhammon, a high-tech agricultural world of no real tactical significance, agent Ian Cormac is sent to investigate, though he is secretly struggling to control a new ability no human being should possess...and beginning to question the motives of his AI masters.

Further attacks and seemingly indiscriminate slaughter ensue, but only serve to bring some of the most dangerous individuals in the Polity into the war. Mr Crane, the indefatigable brass killing machine sets out for vengeance, while Orlandine, a vastly-augmented haiman who herself controls Jain technology, seeks a weapon of appalling power and finds allies from an ancient war.

Meanwhile Mika, scientist and Dragon expert, is again kidnapped by that unfathomable alien entity and dragged into the heart of things: to wake the makers of Jain technology from their five-million-year slumber. But Erebus' attacks are not so indiscriminate, after all, and could very well herald the end of the Polity itself...

Once again Asher has brought us back to the Polity... but this time we are given far more insight into the Machiavellian antics of the prime AIUs, 'Earth Central' and 'Jeruselem', who conspire, either together or separately, to manipulate events surrounding the outcast AI, now Jain-hybrid monster, 'Erebus' and his subsequent series of attacks on the Polity itself.

Throughout all this we are reacquainted with Mr Crane, the mentally-disturbed Golem, and the AI 'Vulture' first encountered in Brass Man, as well as Agent Ian Cormac of ECS. As well as a host of other characters met in some of his other novels, we are finally given insight into Erebus itself. A rather demented creature, this AI, once rebel command AI of the ship 'Trafalgar', is now fully in the clutches of the Jain technology it was given, and is hell-bent on attacking and subsuming everything in it's path. In command of thousands of mind-linked ships and agents scattered throughout the polity, it begins a chain of events designed to distract and confuse ECS and the ruling AIs, climaxing in an all-out assault on the heart of the Polity itself.

The characters are given a lot of extra depth in this novel, and I have to say it is one of Asher's best IMHO. I can't wait to see what he rolls out in his next title, 'Orbus' due our later this year. It seems it will be part of the Spatterjay series which will mean more of those delightful leeches. -shudder-

Overall, most excellent addition to the Polity universe. If you liked any of his previous titles, you'll love this one too.

From Melbourne's gleaming skyscrapers to its edgy nightclubs, Riley Jenson's world is fraught with danger and desire. A drop-dead-gorgeous werewolf - with a touch of vampire coursing through her veins - Riley works for an organization created to police the supernatural races. But when she wakes up naked and bruised in a deserted alley, she knows only that she must run for her life.

Within moments Riley collides with the sexiest man ... more...