Avatar - The Legend of Aang - The Complete Book 1 Collection review 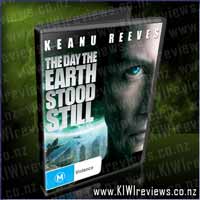 The Earth appears to be in danger from an incoming asteroid, hurtling towards an impact powerful enough to wipe out all life on earth. At the last minute, it is discovered that this is no asteroid, but in fact a giant spaceship, which lands in Central Park, New York. As the alien emissary emerges, he is accidentally shot, which sets in motion an unstoppable series of events that threaten all mankind.

In a desperate attempt to save humanity, governments and sceintists race to unravel the mystery behind the visitor's appearance. When a young scientist and her young stepson find themselves embroiled in the alien's plan, they become the world's only hope to stave off apocalyptic annihilation.

As far as fears go, the destruction of the Earth that we live upon is high upon the list for many of us. With the increasing number of natural disasters and 98% of scientists agreeing with the concept of climate change, it is no surprise that this film got chosen for a remake.

Keanu Reeves plays an alien 'Klaatu', who after landing on Earth is reborn in the form of a human, and as would be expected, the military immediately take the alien property for testing; including a giant robot 'GORT' that accompanied Klaatu. Charged with the duty of protecting the Earth, Klaatu sees the humans' destructive capabilities as a significant threat, and orders the collection of species and the destruction of all humans and human-made constructs.

Effectively this is the story of Noah, but instead of an ark and a flood, we have a sea of nanites, and spheres.

I did enjoy a lot of Klaatu's manner of thinking, with the whole 'no one ever truly dies because the universe has a use for everything. Everything is just transformed into something else' mentality. But I do find the ability to convince an alien being of our love and compassion is highly over-exaggerated.

Visually, it was quite beautifully made, and the special effects were quite well done, but it did little to help. This was a very average movie, and judging by the fact that I agree with Klaatu's opinion of the human race being a parasite upon the world, such a quick change of heart was under no circumstances believable.

Having seen the original version when I was a toddler, and being awed by the concepts (OK, awed by a giant robot with laserbeams and a spaceship) I wanted to see if the magic would carry over to my son. Alas, due to some nasty scenes in this version, and some very disturbing concepts, this version has come out rated (M) and I have to agree, this is not a movie for young minds.

The differences between the two versions are extreme, but some attempt has been made to carry enough of the old bits to at least justify keeping the title. Klaatu is still human in form, but alien in mind, and now has some very cool abilities the original wasn't gifted with. In the original, Gort was a robot, singular in form and function. This hasn't been kept in the modern version, but I must admit the new Gort (or more accurately G.O.R.T now) is way cooler, and draws on the concepts of a semi-organic form of Von Newmann machine and a distributed-hive-intelligence. This really appealed to me, being a hardened sci-fi buff.

I had to laugh though, because once again we see Keanu Reeves acting as Keanu Reeves acting as Klaatu. Why is it that rather than becoming the character, Keanu makes the character become him? Not sure if that really counts as 'acting' or not. In the suit he 'appropriates' at one point in the movie, he even LOOKS like 'Neo' in the second and third 'Matrix' movies! All he needed was the sunglasses. Jennifer Connelly has come so far since her appearance in "Labyrinth" with David Bowie. In this she plays the sole step-mom of a lost and angry young boy (played by Jaden Smith, son of Will Smith, who, because of her career as a Xenobiologist, is drawn into the heart of events by a friend high up in the government. By following her heart, she sets in motion a chain of events that could save, or destroy, the entire human race. With brief cameo appearances by John Cleese and Kathy Bates there are a few 'famous people' moments to keep the star-seekers happy, however be aware that neither of these play genuinely key roles in the story, IMHO.

Overall, the movie is a brilliant movie, taken in it's own right, and a timely reminder to those who should damn well be listening by now, that we are in dire peril of destroying this planet ourselves. Without either a major change in our attitudes, or some alien intervention (and let's face it, if they were going to, they should have done it 50 years ago!) we will quite probably soon go the way of the dinosaurs, and potentially take the whole ecosystem with us! Entertaining, certainly. Educational, hopefully. Worth paying attention to... DEFINITELY.

From visionary film maker Spike Lee comes the incredible true story of an American hero. It is the early 1970s, and Ron Stallworth (John David Washington) is the first African-American detective to serve in the Colorado Springs Police Department. Determined to make a name for himself, Stallworth bravely sets out on a dangerous mission: infiltrate and expose the Ku Klux Klan. The young detective soon recruits a more seasoned colleague, Flip ... more...