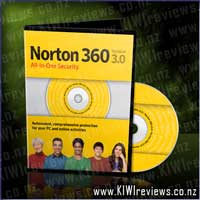 Disclosure StatementFULL DISCLOSURE: A number of units of this product have, at some time, been supplied to KIWIreviews by the company for the purposes of unbiased, independent reviews. No fee was accepted by KIWIreviews or the reviewers themselves - these are genuine, unpaid consumer reviews.
Available:
online or at quality retailers

Being employed in the IT industry for as long as I have you get to know the good brands and the not so good brands in both hardware and software. For a long time Nortons was considered to be one of the best in PC Security and System Tools. Then there was the unfortunate period whre while their products still did the job, they unfortunately used a bit more system resources than most people wanted. That was until the release of Norton Antivirus 2009 and Norton Internet Security 2009 and everything was back to the way it should have been.

Now we have the new Norton 360 v3.0 the successor to Norton SystemWorks this new version is as slimlined as it's other siblings and yet still has all the good features from SystemWorks along with some new extras. One of the new extras is a 2GB secure online backup storage account which I think is probably the best new feature this has to offer.

Now with Windows 7 being the standard Operating System available now, I thought i'd install it and see how compatible it was going to be with it, so I ran the installer and off it went, a short time later and it was installed, however after the obilgitory reboot up came the dreaded "This is not compatible so it will not be run" messages. Whilst it was annoying I thought to myself, lets see about any updates, so after I had created my Norton Account I clicked on the My Account link and then on the Access Norton Account link which took me to the Symantec Website. Once I had signed in there I notice a link over on the right hand side for the Product Update Centre, once I click on that all became clear, there was a nice little note about Windows 7 compatibilty and a link to download a version checker which when downloaded and run will check what version you have and then allow you to download an update that will take you from Norton 360 v3.0 to Norton 360 v3.5 which is fully Windows 7 compatible in fact it supports both 32-bit and 64-bit versions happily.

The Antivirus and Firewall system is the same as that in it's siblings and works exactly the same so I won't go over old ground here on those. One thing I like about this is the Norton Backup, which when combined with the 2GB Online Secure Storage gives you a brilliant remote backup storage solution. Now there are many companies out there offering secure online backups, but not many have the reputation and lifespan of Symantec which I feel gives them a bit of an edge in this area. The backup system is simple to use you nominate either what type of files you wish to backup, or you specify specific files and/or folders, choose where you wish to backup to (the default being the online storage), and the decide when to run the backup, and you then leave it to do it itself. The time it takes to backup is of course related to many factors, firstly the size of the data being backed up, the media of the backup and finally if you are using the online backup system the speed of your internet connections upload speed.

The PC Tuneup portion of Norton 360 is as good as any of the other systems aviable out there. PC Tuneup will monitor your system and help you by cleaning up your registry, you can modify what programs run at startup, and with Norton Insight you can decrease the number of files Nortons has to scan by identifying trusted files that do not need scanning.

Overall this is a great addition to the Symantec stable and a great tool for those who want to keep their PC running in tiptop shape.

Over the years I have had some nightmare experiences with antivirus and system security software. Sometimes they seem to worse things to the system than the malware they supposedly protect against. And yes, sad to say, so of the most scary ones were early Norton's applications.
But times have changed and this time around Nortons have actually put out something well worth having. Easy to install (and mighty fast too) and real easy to use, this package keeps your PC running at top speed and efficiency but without you having to tweak every little setting or answer a thousand stupid popups a day.
From the first double-click to launch the application through to 'ready to use' was just under 3 minutes but that included all the downloads and update installations, so for a change Nortons isnt chewing up all your system resources just getting itself 'sorted out' during install.
Running time is quiet with updating popping in in little packets throughout the day rather than a 10-minute downtime every time you least want it to. I was really impressed by the 'pulse updates' feature if for no other reason than the micro-updates keep my system as safe as it is possible to be these days.
With 'social engineering' the biggest 'way in' nowdays this software has to address the human factor as well. Stupid and naive people arent the only ones getting caught with their pants down any more, even the smartest of us can be targets simply because the ways of getting past our guard is becoming more complicated and 'human'. Bad spelling and a bet on statistics isnt the only method of operation any more. Faked headers, analysis of our addressbook and traffic patterns, website driveby downloads and deliberate malware-infected 'lure' sites are all the rage. "Lets go phishing and see how many suckerfish we haul in" is the way of it.
All in all this package is a huge improvement over previous releases and from what I have seen I can easily believe Nortons is going to be the brand to beat in the next few years as they take this cutting edge and shave it even finer.