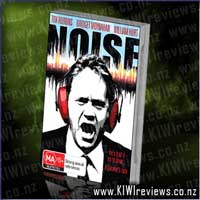 What happens when one man's mission is to silence the world's noisiest city, by any means necessary?

Noise is a black comedy about a man caught in the most impossible of conundrums: in love with his hometown, New York City, but driven mad by its noise. Transforming himself into "The Rectifier", David takes on everyone from the schmuck who ignores his own car alarm, to the city's most powerful citizen, the Mayor. As his daring grows, New Yorkers rally behind him inspiring David to win his fight by the most ingenious of schemes.

I was confused and unsure whether I really wanted to watch this, however part of me was sucked into whether David (Tim Robbins, who is also in The Shawshank Redemption) would succeed in his quest to quieten New York City. Now, never having been to New York, I can only speculate as to whether or not it is noisy and in every movie I have seen, it is about as noisy as any other large city.

The cast in this movie was great and they couldn't have picked a better actor to play David. It is however the kind of movie that you are going to either love or hate or sit there amazingly confused. This movie is strange in parts, an absolute laugh in others and moralizing.

My personal favorite part of this movie was when David bought a truck and added a few car alarms, parked outside the mayors office and set them off.

I have spent a few years floating around the world and have had the luck to vist many of the world's 'great' cities in various stages of their evolution. Having spent a few weeks travelling around NYC three times in total over the span of 8 years it was interesting to see ther perspective this movie placed on it. It certainly is a noisy city. Not too sure if I agree with 'the world's noisiest' but it would rank pretty high. (Try Kuala Lumpur just before monsoon season, now THAT is noisy!)
Only in Amercia could something this insane be possibly real. One man fighting the establishment and in effect the entire population of this huge seething mass of humanity, all so he can suffer - silence. But you know, I could almost believe it.
The story was a little strange, and more than a little flat I am afraid to say. The potential of the film, emboddied by such a good cast, was sadly never really brought out of the script. It left me wanting more from it than the slightly washed out results I saw before me on screen.
Having loved Tim Robbins since I first saw him in The Shawshank Redemption, and been quite taken by the role played by Bridget Moynahan in I, Robot, it was a quite pleasant to see them appearing here. They brought a sense of validity to the movie that kept me watching right to the end.
Really when it comes down to it this movie is a bit like yoghurt. It's a bit thick in places, has strange lumps scattered throughout that keep you guessing, and you're going to either love it or hate it. Personally I sit squarely on the fence. I wasnt impressed enough to like it much but it had enough quirky moments and quality cast I cant bring myself to hate it either.
Sadly, the highlight of the movie falls into two small spots: an interesting 'intimate moment', and a resounding meeting of hammer and howling packed car.

October, 1989 was a bad time to fall into a coma if you lived in East Germany - and this is precisely what happens to Alex's proudly socialist mother.

Alex has a big problem on his hands when she suddenly awakens eight months later. Her heart is so weak that any shock might kill her. And what could be more shocking than the fall of the Berlin Wall and the triumph of capitalism in her beloved East Germany?