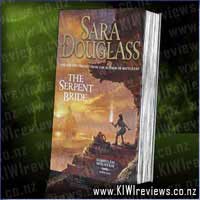 Sara Douglass has won legions of fans around the world for her epic tales of sorcery, forbidden love, and heart-pounding action. Now, with the DarkGlass Mountain saga, she reveals her biggest adventure yet.

Rescued from unspeakable horror, Ishbel Brunelle has devoted her life to a Serpent cult that reads the future in the entrails of its human sacrifices. But the Serpent has larger plans for Ishbel than merely being archpriestess, plans that call for a dangerous royal marriage balancing on the edge between treachery and devotion, and an eerie, eldritch warning: Prepare for the Lord of Elcho Falling...

And there are other dangers. For while Tencendor is gone, even its fall cannot destroy the Icarii. As the Tyrant of Isembaard reaches for glory, both StarDrifter SunSoar and his son, Axis, are pulled into the deadly dance of intrigue and sorcery. The DarkGlass Mountain--once known as the Threshold--is waiting, and as the Dark God Kanubai rises from his prison in exile, no one will escape unscathed.

Fred the (Quite) Brave Mouse
Rating: 9.5

Well having read the Twisted Citadel (Book 2) first by accident, it was a very different experience reading this first book than it might have been otherwise. I was hooked the whole way through, knowing where people would end up but desperate to know how on earth they got there.
It was a morbid sort of fascination, as book two begins in a rather dark place, thus book one was inevitably spiralling towards disaster, and yet the ride was thrilling and I actually finished this monster of a book in two days.

Upon reflection, I have concluded that I rather like this trilogy and I am looking forward to the final book. I strongly recommend reading the books in the correct order, however. There are many intertwining paths that are richly rewarding if understood - and horribly confusing if you come in part way through.

All in all, Sara Douglass has written the beginnings of an epic, sprawling fantasy masterpiece with the Serpent Bride, and despite its intimidating size, it is a good read. I highly recommend it.

This is a new release of a perennial favourite, repackaged as a beautiful hardback gift edition. A new generation of children can now enjoy this classic best-selling picture book.

All the children in Tim's class are taking their teddybears to school to find out which one is the best loved. Tim feels embarrassed. What will everybody think of his poor old battered teddy?

With illustrations by Elizabeth Fuller.