ProdID: 2063 - The Sound of Music
Performed by Manawatu Theatre Society 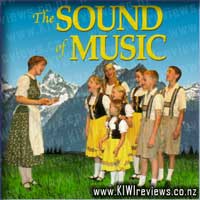 Disclosure StatementFULL DISCLOSURE: A number of units of this product have, at some time, been supplied to KIWIreviews by the company for the purposes of unbiased, independent reviews. No fee was accepted by KIWIreviews or the reviewers themselves - these are genuine, unpaid consumer reviews.
Available:
17th - 25th April 2009

The Sound of Music product reviews

The timeless classic stage musical every family should share. Based on the book by Howard Lindsay and Russell Crouse. Suggested by "The Story of the Von Trapp Family Singers."

"The Sound of Music" tells the story of Captain Baron von Trapp, a widowed ex-naval officer with seven children who serve only to remind him of his deceased wife. The Von Trapp home is thus turned into a gloomy place of order and discipline, until the arrival of a new governess: Frauline Marie who is a nun from a nearby Salzburg abbey. Marie shows the Von Trapp children the miracle of the music, and teaches them how to sing. Captain von Trapp's heart opens up to feelings he had thought forgotten and he too experiences a renewed joy in life.

They all find true happiness at last, only to have their world brought down around them by the 1938 Anschluss of Austria, where Nazi Germany takes control of the country and demands that Captain von Trapp assume a position in the German Navy. But the battle for happiness has only just begun...

I went to "the sound of music" with an open mind and looking forward to a fantastic evening of musical theatre, i left feeling a little bit dissapointed but feel i got my moneys worth.
It was a tat bit "Cheesy" for my liking, perhaps i like modern musicals a bit better but there were moments when the cheese factor rated a gig 9 or 10 on my scale.
Louise Flynn as Maria was well cast and was the perfect maria, i found it difficult to stop thinking of her as Belle from Beauty And The Beast, she was great. Paul Dredge as the captain was a little bit too cardboard but seemed to warm into it once he got going.
Dianne Abraham as Mother Abbess was fantastic, she oozed warmth and had a wonderful voice.
I thought the rest of the ensemble and players looked a bit bored on stage and needed to perhaps pick it up a bit and look more excited to be there.
Overall a good night out but a bit cheesy.

This show is about one man and seven children who have music put back in their hearts, thanks to Maria, a young woman who longs to be a nun but is chosen as a governess. This show has music that is great fun and makes me very happy. I was quite sad at the end because of the sad music. My favourite parts were all the ones with music and all the jokes. Maria was my favourite character because she sang better than the rest. It was a lot like the movie but had some parts missing and some songs not in the same places. This is a great show, based on the real thing, that everyone can enjoy.

The Sound of Music is a movie I have grown up loving, so it was definitely a MUST SEE when I found out it was coming to the Regent. Remembering it was opening night, the minor glitches that popped up were easy to forgive, especially as they were nothing more than small problems with the sound that occasionally almost disappeared during the odd speaking part (thankfully never during a song!!), and a bit of a crackly microphone (usually for poor young David Mock, who played the part of the oldest boy, Freiderich)... although I will admit it did get a little frustrating with how often the orchestra over-powered the singing. It was a very pleasant surprise to learn one of my favourite female performers, the VERY talented Louise Flynn, had been given the lead role as Maria, and she proved to be totally perfect for the part. She played her character with the same gentle playfulness that Julie Andrews brought to the original Maria, even SOUNDING like her many many times throughout the show.
The occasional disappointment came up... like the fact that Dean O'Flaherty was only given a small role as Franz the butler who had no singing. A real shame as Dean has an incredible voice, and would've done well as Captain Von Trapp, whereas the actor they had playing the Captain, Paul Dredge let things down a little. In the beginning, he came across stilted, rather than just cool and distant as the original character had been. However, during the later half of the show, Dredge seemed to relax into his character, and it seemed more natural, along with definite improvement to his singing, which was rather shaky at the start as well (maybe caused by opening night jitters?).
Prop/scene changes happened rather frequently too.. which left the audience sitting waiting, and was a bit distracting with the constant stopping and starting, although there were a couple of times where the children helped to cover this up a bit with an added small scene.
However, the biggest disappointments would defnitely have to have been the over use of the songs "Do-Re-Mi" and "My Favourite Things", along with the inclusion of a song that was NEVER in the movie - "No Way To Stop It" and a new beginning to Liesl and Maria's version of "Sixteen going on seventeen" towards the end of the show. Although these new songs did FIT into the story, they definitely didn't BELONG there, not in amongst a story that many have known and loved for years, and expect to have JUST the old favourite songs, and nothing else. Changing the order of some songs (eg: Do-Re-Mi where it should've been Favourite Things, then Do-Re-Mi AGAIN when it should've been Edelweiss) was a slight annoyance too.
But all in all, these things were all MINOR annoyances, and only because I've seen the movie so many times. To someone who had never seen the movie, sung the songs, etc.. it would've made no difference to the enjoyment of the show. Even for those, like me, who grew up singing the songs and adoring the movie, there were far too many GREAT things about this show for small things to detract much from the general enjoyment. Dianne Abraham was, like Flynn was for Maria, the perfect choice as Mother Abbess, with her rich, powerful, warm, and very emotional voice that rang strongly through the theatre in a moving performance of all her songs, but especially with "Climb Every Mountain". There were many times (again, like Louise Flynn) where I could've sworn it was the original actress who had played the Mother Abbess in the movie, and Abraham is now amongst the list of performers I will be trying to keep a regular eye out for.
Another actor I was pleased to see again was Richard Scott, whose wonderful performance in RENT already had me keeping an eye out for him, as Rolf Gruber, the young love interest of Liesl Von Trapp, played by Georgia Bergerson who he harmonised beautifully with... but yet again, his voice seemed to be held back, and not given the chance to shine with the power I had heard hints of during RENT. Definitely a lot of potential in this performer!
The "baby" of the group, Gretl Von Trapp, was played this time by a very naturally talented Ezra Gilbert who was totally adorable, and was able to draw many a chuckle and "awww" from the crowd with the childish enthusiasm she threw into her performance. This little one will go far if she's given the chance!

Whether you have grown up knowing and loving the movie, whether you know the songs word for word, or whether you are a complete newcomer to the story of the Von Trapp family, this is most definitely a must see production for both young and old. One that will touch your heart with its talented performers that filled the stage with rich emotion, causing many in the audience to shed a tear. Grab the kids and book your seats now, if you haven't already. Oh.. and if you DO know the songs, you are actively encouraged at the end to join in with the singing... a very nice touch!

Its a small world after all. In this revolutionary new series, David Attenborough reveals the marvellous adaptability of the most successful group of animals on the planet. Using pioneering macroscopic filmmaking techniques, he explores in unparalleled detail the intricate, sophisticated behaviours of these fascinating creatures and the complexity of the environments they build and inhabit, in a world normally hidden from the human ... more...