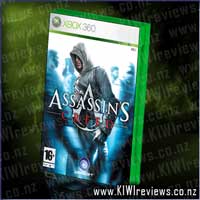 The first game in the Assassin's Creed franchise is set in 1191 AD, when the Third Crusade was tearing the Holy Land apart. Shrouded in secrecy and feared for their ruthlessness, the Assassins intend to stop the hostilities by suppressing both sides of the conflict. Players, assuming the role of the main character Altair, will have the power to throw their immediate environment into chaos and to shape events during this pivotal moment in history.

• Be an Assassin Master the skills, tactics, and weapons of history's deadliest and most secretive clan of warriors. Plan your attacks, strike without mercy, and fight your way to escape.
• Realistic and responsive environments Experience a living, breathing world in which all your actions have consequences. Crowds react to your moves and will either help or hinder you on your quests.
• Action with a new dimension - total freedom Eliminate your targets wherever, whenever, and however. Stalk your prey through richly detailed, historically accurate, open-ended environments. Scale buildings, mount horses, blend in with crowds. Do whatever it takes to achieve your objectives.
• Relive the epic times of the Crusades Assassin's Creed immerses you in the realistic and historical Holy Land of the 12th century, featuring life-like graphics, ambience, and the subtle, yet detailed nuances of a living world.
• Intense action rooted in reality Experience heavy action blended with fluid and precise animations. Use a wide range of medieval weapons, and face your enemies in realistic swordfight duels.
• Next-gen gameplay The proprietary engine developed from the ground up for the next-gen console allows organic game design featuring open gameplay, intuitive control scheme, realistic interaction with environment, and a fluid, yet sharp, combat mechanic.

Assassins Creed is one of my most favourite video game franchises and it all began here!

This Game can be quite confusing, in the main trilogy there is 1 main character called Desmond Miles but at the same time it also has another main character per number, in this one it is Altair.

Desmond Miles is a man who has been kidnapped by a company called Abstergo and are using a machine called the animus to read his DNA which holds the memories of his ancestors. they are reading his DNA to look for something to help them do...well stuff! I don't want to spoil anything for you.

when you step in to the animus you go in to the past and become his ancestor Altair, an assassin in the Crusader times.

The game play is a fun and exciting experience in this free roaming world climbing up buildings, assassinating enemies, hunting down collectables (such as flags) and much more. many people find it gets to repetitive and to a degree, they are right. this is something that the fix in later games, still it does not detract from the experience for me in the slightest.

Overall I would highly recommend Assassins creed as I think it is one of the greatest video game franchises of recent times.

Great Game, a bit clunky and the graphics weren't too great, but over all a good experience! The story was original and could have had a bit of work, but character personality had a lot of effort put into it. The Navigation System was awesome, and meant you could climb virtually any surface. The animation and timing was perfect.

Several things that could have been added was a proper mini map, with name to icon symbols. Most of the time you wouldn't know where you were headed, at least for me. The fighting was a bit to hard and felt clunky, where you would have to wait for your enemy to attack you so you could defend and then assassinate him. Attacking him immediately would just make your opponent defend over and over, while you could then be attacked by his buddies. Navigation System would sometimes be annoying, with it being the only way your character could run; which would lead to you getting stuck half way up the side of a building if you were unaccustomed to playing.

The story was rather long and drawn out, but had some cool plots running through it. Assassinating people was the coolest aspect of the game in my opinion. You could jump off huge building's roofs and land on players with your blades unsheathed, stab enemies from behind, reach out from inside hay stacks or from doors and drag them into there with you, ready for your blades.

Overall, the game worked and was a brilliant starter to the infamous series. Worth buying, playing and obsessing over! Out of ten, ten being the perfect game, I would give it a 4-6. The best part of Assassins Creed is the way that the Navigation System worked, making your player grab exactly where you would expect him to grab and scaling walls easily. On several missions you would have to sneak into castles or enemy camps without being detected. Climbing over walls and hiding in haystacks made my day.

I really enjoyed this game. Transitioning between the Animus and the old medieval times was great. I couldn't help but feel like I wanted to be able to explore the present real world more though. I scoured that laboratory!

The gameplay runs very smoothly, the graphics were great, the way you can listen to people talking and help them as little side missions is great. I love the way you can climb to the top of the highest monument and get your eagle eye on, then dive off the straw covered board into the hay bale below. Made me wish I was experiencing that rush and butterflies as you glide through the air like on some crazy flying fox.

I liked the way you can evade the "authorities" and merge into the crowd. I liked the stealth aspect of this game and also the way that if it all goes pear shaped you can just run away and climb up a building or something and hide until they give up looking for you. The ONLY gripe I had was the combat training circle at the castle. It didn't seem intuitive enough, How they explained to do the moves I just couldn't get and I ended up just button mashing to pas that bit.

I give it a solid 9 out of ten well worth getting. I believe it was a free download on XBL Arcade for a while and also if not it will be in the $20 games at EB Games. Well worth it.

It's a good game, I enjoyed the fact that I was playing an assassin, but in a different time period, which made a nice change from all the modern day shoot em up games, as in this one there are of course no guns and things are slightly more hands-on. The graphics are good, as is the general plot line.

The alternating between spying, pickpocketing and beating information out of someone gives a great diversity to the game, and a lot of attention is given to every little thing, even just the whisper of wind when up high. A good game.

THE SATISFACTION OF DESTRUCTION

•  Write off 20 hotrods in chaotic, car-crunching carnage!
•  Throw some stunts, break some bones!
•  Buckle your buddy's bodywork!
•  Burn rubber across 18 awesome tracks and bowls!
•  Soup up your ... more...