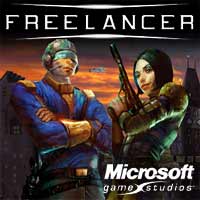 You are Edison Trent, a freelance pilot earning your name and pay one contract at a time. Each job you take brings new allies and enemies, aligning you with different forces within a dynamic universe. Choose to follow the compelling storyline, or break off at any time and follow wherever your adventures take you.

Cons
- Without mods, traveling anywhere takes a little too long, you get sick of flying past scenery very fast (although flying through debris fields and dodging asteroids is entertaining).
- Only a handfull of different side missions (go blow up this station, go fight these dudes).
- Combat is a bit slow at times, you can understand taking 30 minutes to beat a mothership but 45 miuntes trying to take out a small fighter that keeps regenerating its shields sucks.

Gameplay is great with lots of enemys to fight and places to explore, including some rather dazzling areas like ice clouds. Fantastic replayability, lots of bonus things to find (wormholes, old jumpgates, wrecks, hidden bases and probably a load more ive either forgotten or never found). To top it off theres a dynamic world that you can influence with your actions, killing pirates makes pirates hate you but makes the feds love you, and all that gaming goodness.

Well, to be honest I am not one for games much... especially on a PC, after all there are plenty of game consoles out there, why should I spend thousands on a machine to play games, when I can spend hundreds instead... but I have to admit this game had me hooked within minutes.

The scenarios are as varied and freeflowing as you could possibly imagine, however the game does require you to follow certain sub-plots in order to progress, but each sub-plot is dependant on your current status. Kill too many pirates, you're restricted to being a good-guy, go renegade and kill some cops, and you're a prime candidate to join a pirate crew.

With your options fairly wide open, there are not many avenues close to you in this game... your ship can be upgraded almost anywhere (get your defences sorted out fast, the guns can wait, but dead men don't collect any bounty) and there is always something worth trading if you keep a close eye on who pays how much for what... even hauling toxic waste out of some systems can pay for the whole trip plus a major upgrade.

The graphics are a little jerky unless you have a good 3d card with plenty of ram, but even on a bog standard PC this game is impressive. That's high praise coming from a non-gamer like me! The missions get tough rather rapidly, especially if you go renegade early in the game, and I am STILL trying to get past a nasty ambush scenario, so the replay factor is very high.

Another fine product supplied by Microsoft. Thanks guys, keep them coming!

Pushing the boundaries of what fans have come to expect from the record-setting entertainment franchise, Call of Duty: Black Ops II propels players into a near future, 21st Century Cold War, where technology and weapons have converged to create a new generation of warfare.