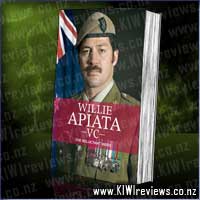 Disclosure StatementFULL DISCLOSURE: A number of units of this product have, at some time, been supplied to KIWIreviews by the company for the purposes of unbiased, independent reviews. No fee was accepted by KIWIreviews or the reviewers themselves - these are genuine, unpaid consumer reviews.
Available:
November 10, 2008

Lance Corporal Willie Apiata, a New Zealand Special Air Service trooper, trapped at the front of a major fire-fight with suspected Taliban insurgents on a dark and desolate Afghan hilltop. One of his mates was bleeding to death and the other was pinned down under intense enemy fire.

For Apiata there was no choice.

He fell back on the values instilled in him by his mother, the skills learnt during a tough pig-hunting life in the bush on the East Coast of New Zealand, and the knowledge won from years of training with the NZSAS.

With the lives and safety of his mates his only priority, Apiata performed an act of courage that has now become part of New Zealand history - an act that saw him become the first recipient of the Victoria Cross for New Zealand and just the 14th holder of the Commonwealth's highest honour for bravery since the end of the Second World War.

This is the story of Willie Apiata, VC, an ordinary kiwi bloke, a very reluctant hero, just doing his job.

'I knew we had to move. With the wagon being on fire it could only protect us for so long. There were that many RPG rounds rocking it, hitting it one after the other - sooner or later one of us was going to take a round if we stayed there.'

When I first heard, that Willie Apiata, a Lance Corporal, New Zealand Special Air Service (1NZSAS), was being awarded the Victoria Cross for New Zealand, as I'm sure many New Zealanders did, I wanted to know why. When I read the Citation for his medal on the website of some news agencies, I thought to myself: "Well, this isn't about to blow over any time soon". Sixteen months later, this book found itself in my hands.

What goes on behind the fences surrounding the compound housing 1NZSAS are some of New Zealand's best kept secrets. The real on-goings only shown once previously, by a TV program that showed parts of the selection, and "cycle" process, for The Group. A process that Willie Apiata himself, had only completed THREE days before he was informed that he would be flying to Afghanistan.

Unlike many biographies of Military personnel, this doesn't dwell on the selection process, or go into graphic detail of the processes that Willie went through to get to where he is. This book, unlike the rest, focused on the building of the man that is.

It covered details of his first pig-hunt. Of his getting dropped off to his first "Adventure with the Weekend-Warriors" (Territorial Forces), by Black Power gang members. Of his various jobs, including driving long-haul truck routes, fishing, and being a door-to-door vacuum Salesman.

This book invites everybody to get to know "The Most Trusted New Zealander". I enjoyed reading this book. It's not all "Beers and Birds" like some soldiering books are. It's not all Gung-Ho. It's worth every penny, to get the interesting facts, to learn, to get the true picture, of the everyday, kiwi bloke. Who was just doing his job.

This is as accurate as books like this get, the information backed up with countless hours of research, and integrated with narration from Willie himself. A recommended read for anyone.

From his early life in small town Te Kaha, to his actions in the deserts of Afghanistan, this is his story in his words. This is the story of Willie Apiata, VC - an ordinary kiwi bloke, a very reluctant hero, just doing his job.

One choice can transform you. Pass initiation. Do not fail!

In sixteen-year-old Beatrice Prior's world, society is divided into five factions - Abnegation (the selfless), Candor (the honest), Dauntless (the brave), Amity (the peaceful), and Erudite (the intelligent) - each dedicated to the cultivation of a particular virtue, in the attempt to form a "perfect society."

At the age of sixteen, teens must choose the faction to ... more...