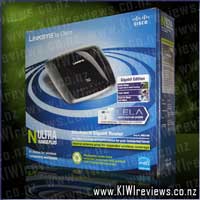 Disclosure StatementFULL DISCLOSURE: A number of units of this product have, at some time, been supplied to KIWIreviews by the company for the purposes of unbiased, independent reviews. No fee was accepted by KIWIreviews or the reviewers themselves - these are genuine, unpaid consumer reviews.
Available:
At all good computer stores

Incredible coverage and performance for your Connected Home

•  Internet-sharing Router and 4-port Gigabit Switch, with a built in speed and range enhanced Wireless Access Point
•  MIMO technology uses multiple radios per band to create robust signals for maximum range and speed, with reduced dead spots
•  Much faster than Wireless-G, but also works great with Wireless-G and -B devices
•  Wireless signals are protected by industrial-strength encryption, and your network is protected from Internet attacks by a powerful SPI firewall

If you are used to a router being an ugly grey brick that you simply have to stash away behind something just to keep the desk/office looking tidy, then be prepared for something new... and if you know a little about Linksys's previous entrant, the WRT160N, then you are well-prepared already... With swooping wings and piercing blue display lights, here comes something that actually looks good, and performs pretty well.

With the abundance of techno-n00bs flodding the cyber shores, brought on by broadband plans getting bigger, faster and cheaper, the 'aim for the lowest common denominator'approach of the new-look LELA software (Linksys EasyLink Advisor - the 'wizard' system supplied with the hardware) may be a little insulting to those who know a little about what plugs go where... but will be invaluable for the techno-illiterati setting up their first high-tech toy that doesn't fit into the case. A total of 9 steps get you from an unboxed assortment of bits to a functioning broadband connection in a matter of minutes. Even though in our case a lot of it proved utterly pointless, due to the idiosyncracies of the Dynalink ADSL2+ modem, LELA is a godsend for those who simply don't have much of a clue when it comes to the technical aspects of hardware and just have that "I just wanna plug in and go!" mentality.

A big future-proofing tool available on this unit that isn't available on many higher-end routers is WPS - Wi-Fi Protected Setup. A new industry revelation, this is a simple one-click auto-configuration protocol we'll see more of in the future. Similar in operation to 'HotSync', devices have a single push-button on them with a distinctive double-arrow icon. Pressing the button on both devices at the same time will allow them to handle all the nitty-gritty work of connecting, configuring and self-securing, leaving you to stare in awed incomprehension at the pretty blinky lights. At present, few devices carry this feature, but Network-Attached Storage (NAS) devices are in the pipeline, as well as media extenders and the like, primarily aimed at the home-market. Linksys are proclaiming that many of their devices are being upgraded to use this feature, so watch for it.

On the downside, operating in the highly-congested 2.4GHz range, your connection will suffer a lot of noise from surrounding wireless gear. With cordless phones becoming commonplace, and even my baby monitoroperating in that frequency band... you have to expect some signal loss. We were getting a respectable transmission rate of around 49mbps in dual-mode (802.11g and 802.11n draft 2), but with signal strength peaking at 65% and the noise-rating bouncing between a low of 14% and a scarily-high 93%... I had to wonder why they didn't push it up into the far less crowded lofty heights of the 5Ghz band the higher-end N-protocol routers fly in. They claim that such performance isn't justified in a home-based unit, but I *strongly* disagree... an office is a far more controllable environment, whereas in a home situation you are at the mercy of your neighbours... proving it a far SMARTER option to explore for any user in a semi-residential situation.

A few small points of note: Various Port Forwarding options - helped resolve an issue using older email clients, but otherwise is a bit pointless for home users. However, being more suited to tech-heads and corporate solutions, this device is equally at home on a workdesk or home craft table.

To test maximum security possible between devices with minimum common protocols, turned all encryption off and used MAC Address validation only. Worked just fine, enabling a good solid connection of around 65% down a long hallway without using any overhead on encrypt/decrypt. Devices that only supported WEP could connect safe and sound as long as we fed their MAC Addresses into the router. Of course, as to be expected, all higher-end security worked a treat. This unit supports WPA, WPA2, 64-bit and 128-bit WEP. With a fairly decent on-board firewall to back you up, you're pretty safe behind this... but remember: every better moustrap causes evolution to breed a smarter mouse - keep your PC's security as high as you can at all times. As the Irish say... "To be sure to be sure."

Overall, stylish and sleek with it's glossy black chassis and brushed-silver 'wings', this is another great step-up from the WRT160N. Using similar technology, but with steroids thrown in, this gives a much improved performance and user-experience. However, due to bad ventilation design, take care with placement to avoid overheating issues! Even though it can be wall-mounted (and looks STUNNING at night, trust me) it should be mounted in such as way as to allow extra ventilation. I used a couple of picture-hanging hooks bent in such a way as to allow me to easily slide the unit on or off, but allowing it to sit no closer than 5mm from the wall. Charcoal wallpaper is NOT a good look! The only key feature I would have liked to have seen included is an external aerial port. Sure, it would ruin the sleek design, but it has cables coming out the back anyway so one more tiny slimline one wouldn't make any difference and could seriously reduce dead-spots.

The GRone case is classed as a Full Tower Chassis. Made from 0.8mm SECC Steel, this is a stylish and functional case for any discerning PC owner.