ProdID: 1987 - Indiana Jones - 4 - The Kingdom of the Crystal Skull
Directed by Steven Spielberg 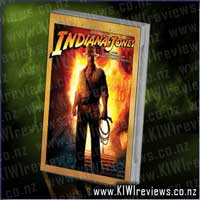 Disclosure StatementFULL DISCLOSURE: A number of units of this product have, at some time, been supplied to KIWIreviews by the company for the purposes of unbiased, independent reviews. No fee was accepted by KIWIreviews or the reviewers themselves - these are genuine, unpaid consumer reviews.
Available:
October 2008

Indiana Jones - 4 - The Kingdom of the Crystal Skull product reviews

Steven Spielberg and George Lucas once again bring you the greatest adventurer of all time.

We find indy trying to outrace a brilliant and beautiful Russian agent for the mystical, all-powerful crystal skull of Akator, in a quest that is filled with spectacular fun.

Teaming up with a rebellious young biker and his spirited original love, Marion, Indy takes you on an action-packed adventure in the exciting tradition of the classic Iniana Jones movies.

Something about this film irked me. Whether it was the fact that Harrison Ford has not aged very well, the cheesy clichĂ ©s (You just brought a knife *insert dramatic pause* to a gun fight), or just the rather inept villains, I'm not too sure, but this film was difficult to take seriously. Perhaps it was the fact that the plot was largely based around aliens, or how in reality, Indiana Jones could have just done nothing and the same ending would have occurred. I think that last one hit the nail on the head. This film does well to try and come up with a plot line and really comes up a good attempt, but it falls flat as there are no real consequences of anything; the world isn't in danger, and nothing really changes.

Graphically, this film is pretty good. Some of the computer generated effects are incredibly obvious and out of place, but most of the environment looks believable. This movie doesn't quite flow as well as I expected, starting off full pace, and decelerating over time. That's without going into the "interesting" choice in casting; I'm still not sold on Shia LaBeouf as an actor.

This film did well for an addition to the already successful franchise, but it doesn't stand up to its predecessors. It falls well short.

I loved this movie, at least until it turned into aliens, then it fell kind of flat for me. But, settling back to enjoy the movie, and forget about the aliens (at least until we met them), made the film enjoyable.

I liked that it was done with exactly the same humour etc as the first three and still stayed true to everyone's character.

This is never going to be my favourite, but it's still a must see if you love Indiana. Could have done without the aliens, but what's done is done and it's still a good movie.

Hmm... aliens. The moment they turned up I thought - this is a Spielberg movie, isn't it? Aliens didn't quite fit the genre for me. Then again, the comedic pairing of Harrison Ford (Indiana) and Shia La Beouf (for Transformers fame) worked surprisingly well, espcially once Indiana's old flame, Marion, is added into the mix.

All in all, the main thing I remember about this film is having a bit of a crush on Shia La Beouf and laughing at the awkwardness between him and Harrison Ford. Then again, I have never been a huge Indiana Jones fan (the second one freaked me out and I still refuse to watch it), so perhaps, in the tradition of these films, it was actually rather good.

Far from being a smooth continuation of the classic trilogy, this is still a strong "Indiana Jones" tory and destined to become the fourth classic.

This time, the creators decided to give the Germans a break and instead pick on the Russians... how amazingly 'cold war mentality' of them. Still, they proved to be the perfect antagonists for this tale.

A pinch of ancient culture, a dash of Indy Action, a handful of Russian Punch, and an unknown quantity of multi-dimensional aliens... stir well with a professor having a psychotic episode, gently fold in a teenaged motorcycling misfit with a secret even he doesn't know, a lost love, and a sprinkle of betrayal... bake under a thermonuclear bomb test cloud... and you have something well worth watching... even if it does have a hefty dose of corn scattered liberally throughout.

Showing up, yet again, in a role that suits him well, we find Shia LaBeouf, and we also see welcome appearances by Karen Allen, John Hurt and Jim Broadbent. And, of course, Harrison Ford reprises his most famous and well-loved role as Indiana Jones.

overall, a great action flick, but best taken with a grain of salt. Personally, I think everyone did a great job, except Cate Blanchett who just came across as a limp noodle to me. If she was supposed to be in any way Russian-ethnic, she flpped. Her accent waved wildly across the globe from Ukrainian to British, and her character just seemed... pointless. Anjelica Houston would have been my pick for the role... she looks the part and can pull off some amazing linguistics when required to.