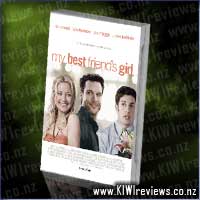 A master at seducing - and offending - women, Tank is a professional "My Best Friend's Girl."

When guys get dumped, they hire Tank to take their ex-girlfriends out on the worst date of their lives - an experience so horrible it sends them running gratefully back to their beaus.

So when Tank's best friend, Dustin, is dumped by his new girlfriend, Tank naturally offers to help out... and ends up meeting the challenge of a lifetime.

Smart, beautiful and headstrong, Alexis is the first girl who knows how to call his bluff, and Tank soon finds himself torn between his loyalty to Dustin and his love for his best friend's girl.

First off this movie is one of those you either like it, or you don't films. The entire film is filled with offensive material, which I personally find rather amusing - some others don't.

Dane Cook gives a great performance as does Jason Biggs, however both roles are quite predictable. And Kate Hudson, well she's quite good in it too. So overall good acting if not a little predictable.

All three actors seem to be the kind that only fit in certain roles... same with Lizzy Caplan who's also in the film.

If you like Dane Cook's stand up, you should like this movie, although remember it is a Comedy/Romance, not just a comedy.

I went into the screening of this movie, on reccomendation of a couple of close friends, and based on a couple of Media interviews I have heard with the cast.

Having seen several of the Credited actors in movies, of which I am quite fond, such as Jason Biggs, who became well known for his roles in the first three American Pie movies. Having seen him in other movies as well, I had a fair idea of what to expect in this one, for he usually has me holding my sides with laughter.

I should have taken my cue with this movie, from the fact that my friend and I, were the only people in the cinema, from the time we walked in, Five minutes into the adverts.

The movie opened, into the screening of a smut-filled, vulgar, date-gone-wrong. Where is the comedy? During the entire screening of this travesty, I can count on a single hand the number of times I laughed. The most outstanding of these times being at a wedding, and propositioning the mother of the bride, using a colorful depiction.

I was dissappointed overall, and a little offended at what some may call humor in this film, this coming from me. One of the most vulgar and offensive people I know. I had to fight the urge to exit the cinema 30 minutes into the film.

The plot is virtually a cross between any love-story, and most homemade adult pictures. With expletive language rivalling that of the great Billy Connolly, and a plotline so transparent, that the clingfilm I use to keep my salads fresh in the fridge, seems more than a little cloudy.

I was more than a little surprised to see some of the names of people who had sunk low enough to sign to a script such as this, and would reccomend this movie to not one person.

Two Thumbs-Down from this reviewer

I Will Kill Your Monster

In a legendary time of heroes, the mighty warrior, Beowulf battles the demon, Grendel and incurs the hellish wrath of the beast's ruthlessly seductive mother. Their epic clash forges the timeless legend of Beowulf.