« Cruel To Be Young review 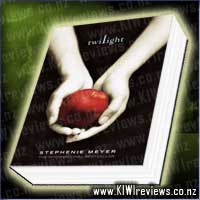 When 17 year old Isabella Swan moves to Forks, Washington to live with her father she expects that her new life will be as dull as the town. But in spite of her awkward manner and low expectations, she finds that her new classmates are drawn to this pale, dark-haired new girl in town. But not, it seems, the Cullen family.

These five adopted brothers and sisters obviously prefer their own company and will make no exception for Bella. Bella is convinced that Edward Cullen in particular hates her, but she feels a strange attraction to him, although his hostility makes her feel almost physically ill. He seems determined to push her away - until, that is, he saves her life from an out of control car.

Bella will soon discover that there is a very good reason for Edward's coldness. He, and his family, are vampires - and he knows how dangerous it is for others to get too close.

The Curious Incident of the Dog in the Night-time
Rating: 8.8

Twilight is one of those books that you just can't put down. It is about teenage love and the obstacles that they face, made even more difficult because Edward is a vampire. I had seen the movie before reading the book and it worked perfectly as I had the faces already in my head and it explained a lot of the scenes so my imagination was not too far from the mark.

Stephanie writes in such and easy manner that you can not help but get pulled into the mysteries magical world of Forks Washington. The movie basically is just like the book so between the two of them I became a Twihard and was routing for Team Edward right from the beginning. The movie doesn't show how isolated Bella felt, and how socially awkward the Cullens were at school. It gives you more in-depth into the vampire world and is brilliantly written.

I am glad that I saw the movie first (to which I hated) and then rewatched and then read the book because I picked up so much which carried me through the other movies and films. She is a very talented writer and will definitely be keeping an eye out for future stories.

Don't judge me, but sometimes you just need something trashy to read! For example, I need something that counteracts my jet lag this week after a lot of air trips this week... So, re-reading Twilight sounds ideal! Especially given the adult movie date with the girls that I have later this month to see the latest movie...

And man, it was just an entertaining the second time around! yes I agree it is melodramic. And oh the teenage angst! Hormones, liking the other sex, drama... All of this is in this book! Not to mention vampires.

There are heaps of writing and literary comments on how trashy this book is, or how bad the romance/relationships are. However I read all the books, read all the movies, and enjoyed the hell out of them. I do know that I read a range of books - intellectual and escapism - and this definitely falls into the latter category. I'm okay with that :)

I have spend many hours of the day (and night) reading this book from cover to cover! Stephanie Meyer is an amazing author who can bring the storyline to reality through the eyes of Bella. Exhiling herself to Forks may have been the biggest sacrifice Bella has ever made for her family....that is until she meets Edward Cullen who despises her very existence (don't worry, it's not for long!) and ultimately changes the way she views her actions, her life, her morals and everything she stands for.

It's not easy being in love with a vampire...especially when he constantly struggles not to eat her! But they make it work...and you really want them to make it work, because in the process of reading the book, you yourself have fallen in love with Edward Cullen!

This is one of those satisfying books where you don't have to think, you don't have a chance to put it down, you finish it screaming "NO! You can't end it like that dammit!" and then dutifully head down to your nearest book store to get the next three.

Oddly enough, I was introduced to this series before the hype... in fact, before the third book was released. My brother had been reading it on the recommendation of his US girlfriend and really enjoyed it (unlike the stereotype, not all guys who like this book are gay).

I am a huge sucker for romance and so I fell in love with this book's male lead, Edward, almost the moment I met him. Bella, on the other hand, was tolerable but vaguely annoying (though I can't help wondering whether I was just jealous).

The great thing about the way Stephanie Meyer has created the vampires in this book is that they seem completely plausible. As if vampirism is a funny disease that affects a very small percentage of the population and Bella is proving that she can love Edward despite his disability - which is sort of like falling in love with a manic serial killer and trusting them not to murder you - thank goodness Edward is 'vegetarian'.

There is plenty of humor in the telling of this tale and each page leads smoothly onto the next until you wonder where the day went. I can fully understand why everyone seems to love this series. It's not deep or particularly meaningful and I know I am not going to find the perfect one hundred year old man in the body of a hot seventeen year old any time soon... but somehow, I leave this book feeling like Bella's journey was my own and I get to keep just a little of their romance and perfection for myself.

Bella is moving back to a dreary little town to live with her father. Expecting to be a wretched misfit at the local school, she is surprised to find some friends, but perplexed about the pale attractive boy who seems to instantly hate her...(we all know where this is heading).

High marks to Stephenie Meyer for creating a story that made me kick my shoes off, curl up in a compfortable chair and go cover to cover in one sitting (no, I didn't get anything else accomplished that day). Just as well it was such an easy fast read though, as the whinging of Bella Swan is probably only out done by that of Luke Skywalker, but that is another story...

Although there were times I found Bella's character somewhat shallow and irritating, and the basis of Edwards attraction to her rather simplistically primal, the story moves along at a satisfying pace and presents some interesting characters and situations.

All in all, I found this to be a worthwhile and fun read, with some quite amusing moments.

To sum it up;
Bella moves to a small town, she hates it there. She makes friends quickly at her new school (the boys think she's a big hit). All except the one boy who catches her attention, Edward Cullen.
At first he makes her feel as though he hates her but she soon realises he is trying to protect her from what he and his family are (Vampires).
Edward sees Bella as delicate, someone that needs protecting from him and everything else bad in the world. Unfortunately for him Bella is clumsy, and attracts all forms of danger.

The story gains momentum after they realise they love each other, and spirals out of control from there. It is full of desire, danger, passion, love and friendship.

It is a fantastic read for all females from teens to adults. Extremely well written and everything in it is described in a way that you can picture the people and places.
You get drawn into the book and the lines between fantasy and fiction get blurred. I literally could not put it down until I finished it. As soon as I had finished it I was at the shop buying the rest of the series.

For centuries, the Gadda have worked to keep their identity secret from the rapidly expanding human race. All this is now at risk - the most terrible of Gadda teachings, the Forbidden texts, have been stolen and the race is now on to find them.

Ione Gorton may have got her best friend back from Australia, but Maggie's elevation to the ranks of Guardians means that she's not around as much. So when Stephen O'Malley, almost the youngest ... more...